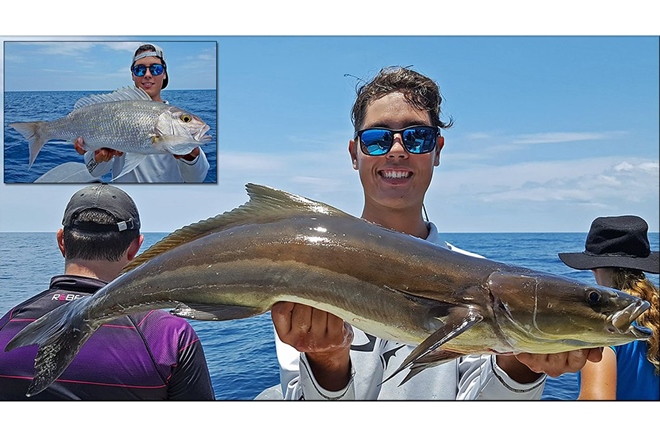 Todd Sparey from Hastings in Victoria with a cobia and quality gold band snapper. Photo: www.fishingnoosa.com.au

With the promise of some good offshore action for pelagics, anglers were out in force last weekend. They were not disappointed, with the pelagics really starting to fire up. With plenty of bait in the water around, Halls Reef, Jew Sholes and Sunshine Reef  this in turn has seen reports of good sized spotted and spanish mackerel, dolphin fish (mahi mahi) and tuna both Mack and yellow fin . Trolled lures, live baits, pilchard and yakka floaters have all worked well to entice offshore action. Good numbers of coral trout have also come from Sunshine Reef with live bait fished hard to the bottom the most productive. We are still seeing good sized snapper coming from the Barwon Banks and the Hards with quality pearl perch also in the mix. Mackerel, wahoo and mahi mahi have also been in good numbers around North reef. Fast moving deep divers like the Nomad DTX minnows have been doing the job. Chardons Reef has seen Juvenile black marlin smacking larger bait like whole bonito. For those that did the run up to Double Island Reefs were well rewarded with large pelagics and a variety of offshore action including a great range of reef species such as snapper, sweetlip, pearl perch, jew, cobia, mori cod, red emperor, and nannygai. Spanner crabs continue to be taken around that 35m depth so why not drop a few pots while you have a fish!

In the Noosa River; quality whiting have been great fun on surface lures. Weyba creek, the Frying Pan and Dog Beach have been the best areas to chase them on lures, the Eco gear PX 55 have been dynamite with their trailing hook capturing plenty of quality elbow slappers. Soft plastics and surface lures fished early and late afternoon around the Woods Bays have been accounting for big eye trevally, golden trevally, giant trevally and tailor. The area just off the Tewantin boat ramp has seen lots of big eye trevally and giant trevally throughout the night. For the bait angler’s prawn, mullet, bonito strips and whitebait have all been prime baits. Good Flathead continue to be caught from the sandbanks around the river mouth on soft plastics and drifted baits. Mangrove jack are really firing up with the warmer water, the deeper areas of the first ski run under jetty’s and structure in the river has been the prime hunting ground. Paddle tail soft plastics around 4” are perfect for targeting jacks and the Chase Baits from River2sea are one of the best option. Crabbers have been getting good catches and blue swimmers down towards the mouth and mud crabs a little further upriver.

On the beach; good whiting have coming from the gutters along the eastern beaches, North Shore and north of Teewah. Live beach worms and pippies being the most successful bait. Dart and flathead are also inhabiting the same gutters. Casting light Arma Metallic and Radico slugs into the wash around the protected points of Noosa and off the beaches has been producing Tailor and smaller Trevally. For the rock hoppers; casting Bigger Stickbaits toward feeding birds is sure to help raise a mackerel or tuna. Try the Rockslider from Shimano, they have plenty of cast weight to get them out.

In the fresh water; Surface lures around the edges of Lake Borumba has proving successful on the bass, Plastics fished amongst the weed on the edges of Lake McDonald are accounting for some quality specimens.  In the deeper water, Blue Blue Micro Jigs and small Bassman spinnerbaits are working well, also try 2.5-3.5” plastics including Zman Slim Swimz and Fuze Triple tail on 1/8th jigheads.