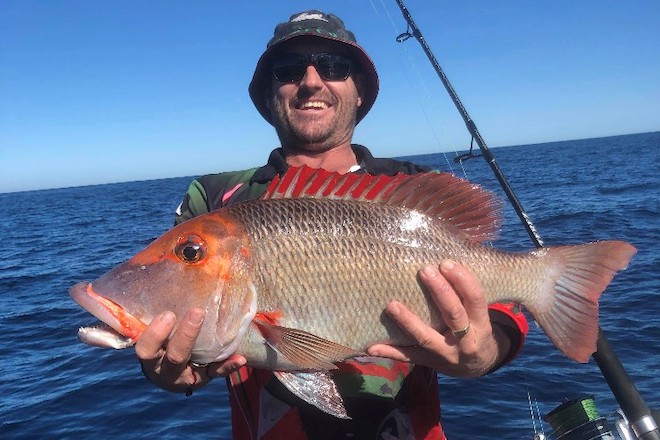 Owen Nowland with a 65cm redthroat emperor he caught offshore from Bundaberg.

Firstly, how good has the weather been over the last week? There has been some cracking days for the big boats to get offshore. There has been some awesome fish coming over the side. The bait of choice was mullet fillets, squid, yellowtail and pilchards. The rig to use depending on the bottom you’re fishing, can vary from a paternoster or a running ball sinker to a set of gang hooks or even a snelled rig. The species of fish that were caught are grassy sweet lip, tusk fish, parrot fish, cobia, red throat emperor, coral trout, red emperor and cod.  The coming weather isn’t looking so good, so always check the weather report before heading out.

For the smaller boats that have been fishing the inshore reefs, they have been catching a good range of fish from grassy sweet lip, cod, mackerel, coral trout, mackerel, tuna and snapper.  There are also a few bluefin tuna getting around in the schools. The anglers have been using a range of different lures and baits. The Halco Sli-Dog lure in all the colours has been the go-to lure for the schooling fish on the Cochrane Artificial Reef and Bargara Two-Mile. The baits that have been doing the damage are mullet fillet, pilchard and squid. The same rigs can be used for inshore, so a running ball sinker to a set of gangs or a paternoster rig.  The weight of the sinker depends on the tide and water movement over the area being fished.

The Burnett River has been producing some good fish. The bream and flathead have been firing lately. The bream have been caught on the rocks at Kirby’s Wall. The rock walls at Fairymead Boat Ramp have been the go to spots.  Also, the North Wall at Burnett Heads has been producing some nice cod and finger-mark as well. The flathead at this time of the year have been caught in the shallows chasing the bait fish into the warmer water. The 4 inch Paddle Tail and the Curl Tail in the bloodworm colour rigged on a 4/0 3/8 ounce jig head has been the stand out.  There has been a few nice blue salmon caught as well.

The Kolan and Baffle have been producing a good range of flathead and bream. The crabs have been moving as well with some of the big ones coming from either the deep holes in the river or hard up into the mangroves. The rock walls have been producing some nice size bream using a strip of mullet fillet.  A live sprat or a fresh prawn has also been working a treat. The flathead have been caught again up in the shallows chasing the bait fish in the warmer water. The run-in tide for both species has been the best –  the first hour the run in and the last 1.5 hours of the run out.

With the colder weather that we have had, there has still been some nice fish caught at Lake Monduran. Most of the fish have been coming off the shallow points and tree lines in the wind blown bays. There has been a lot of fish caught in Bird Bay and closer down the front of the dam. The lure of choice for the anglers has been the Jackall Squirrel in the 115mm and the 5 inch Paddle Tail.  White is always the go-to colour in the dam. If the fishing gets tough, just remember to use long pauses with a hard-body lure. I personally count to ten before I twitch the lure again when using a paddle tail. I normally try to work the whole water column so my lure has the best chance of being In front of the fish. The go-to method for paddle tails is to vary speeds depending on the depth of water that I fish. 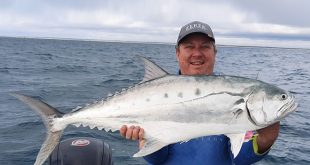