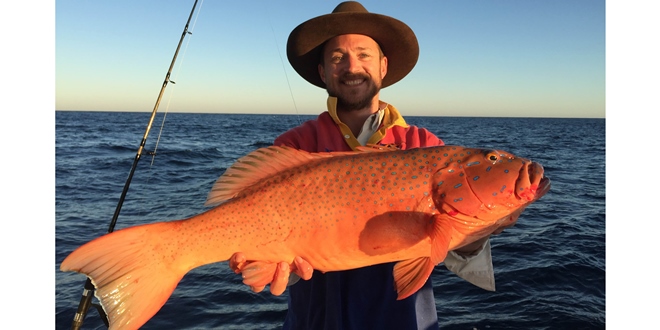 Scott Welch with the coral trout he caught in the Southern Gutters recently.

Earlier this week saw a small break in the weather offshore from the Bundaberg area, and a few boats managed to get out.

Most caught a good feed with most of the offshore areas producing some quality reds, trout and parrot.

The areas out to the Fifteen Mile produced some quality grass sweetlip, squire/snapper and a few tusk fish.

There is still a few school mackerel about as well as an odd Spanish mackerel.

The inshore reefs such as the Cochrane Artificial Reef have been producing some quality snapper and grunter.

All of the creeks and rivers are still fishing well, with most systems producing a few winter jacks, mainly by live-baiting or using soft vibes.

In general there is plenty of whiting, bream and grunter about with the run-out tide being the favoured tide.

There is still good numbers of blue salmon about with most being caught out of the deeper holes.

Again, soft vibes such as the Jackall Tranzams and Strada X-Blades being the hot favourite lures.

The dams are a bit slow with Lake Monduran being really slow due to the colder temperatures we have had recently.