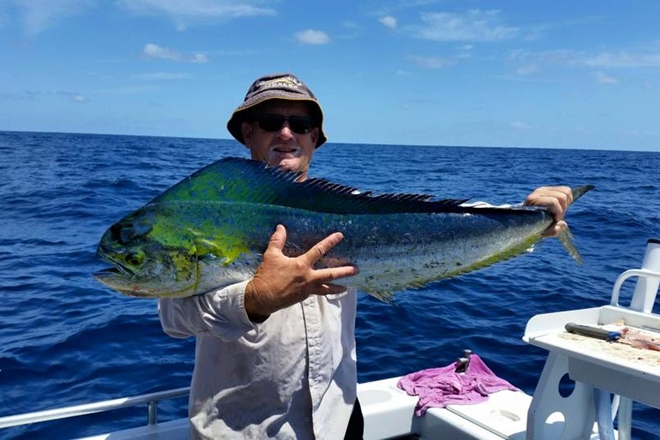 Sandra's husband Tony was on the boat as well and landed a beautiful mahi mahi.

With only a few days left until the barra season reopens for 2016 we have already been receiving a lot of reports of barra being active throughout the Sandy Straits whilst targeting other species such as Mangrove Jack and cod.  All going well this should be a sign of things to come over the next few weeks.

The offshore scene has been firing with catches of Spanish mackerel, snapper, spangled & red emperor over the Australia Day long weekend.

The forecast for the weekend ahead is looks rather bleak with severe storms predicted for Friday and Saturday which may keep all but the diehard of fisherman off the water.

Neap tides early next week will be the ideal time to fish areas such as Teebar ledge, Bluff reef and the channel between Inskip & Fraser Island.  For best results get out early and fish the change of light for species such as snapper, sweetlip and cod.

Until next week stay safe on the water.