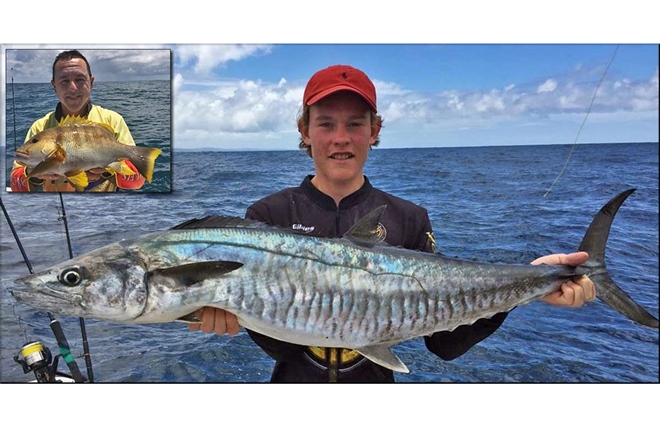 On the offshore scene it has been all about the pelagics, with good sized 8-12kg spanish mackerel caught midweek around Halls and Sunshine reefs. The bigger fish have been taken on slow trolled dead or live baits. The return of the famous Davo’s Spanish Special lure has ensured some great catches. These lures are loaded with flashers and a squid skirt, they come in two sizes and are weighted perfectly for garfish, slimey mackerel, large pilchards and sauri’s. Fishing deep diving lures like Halco Lazer Pros and Strada Trackers have also picked off some solid fish on Jew Shoal during early hours. Big surface lures like the Nomad Riptide have also been working on the early morning bite, spanish, wahoo and dolphin fish have ben smashing these in the low light and on the big tides.

Around Sunshine there has been some monster coral trout caught on well-presented gang hooked pillies, livies & flesh baits. Heavy leader and a big ball sinker is the way to go. There have also been some good halls of spanner crabs, if you have never set these traps come and talk to the team at Davo’s on how to set them.

Early mornings and big high tides have allowed many surface anglers to get into the trevally, tailor and queenies around Woods Bays and Munna Bridge last week. Surface lures including the 105mm Strada Float pencil, Zip Baits and Skinny Pops have all got the runs on the board. With the clear warm water we are seeing at the moment, it’s a great time to chase whiting on surface with the Frying Pan the perfect spot on the run out tide.

There has been good numbers of large flathead getting caught in the river at the moment, fishing plastics like the River2sea Chacebaits Curley Baits has been very effective, fish them deep on a heavier jig heads during run out tides has seen some great results. For the bait anglers prawns and small fish baits have also been deadly on the flatties. Jacks continue to be caught with most angler doing battle in the evenings, fishing structure with live baits has been the most productive.

In the Fresh water; with the water warming up fishing the deeper drop offs with blades, spinnerbaits and deep diving lures has been getting the better fish in both lake MacDonald and Borumba. TT vortex spinnerbaits and Little Max blades have been getting the job done. Lower water levels are causing the fish to school up in deeper water. using a side sounder will greatly improve your chances when chasing these fish. Come in and see the new Humminbird range of sounders at Davos Boating World which is located right next-door to our Tackleworld Store.

On the beaches; Dart, bream and whiting are all in good numbers in the gutters along the Noosa Northshore, around Sunshine Beach and down to Coolum. Lightly weighted Whiting Wacker rigs loaded with with fresh sand worm have been working very well. For the dart and bream the use of a surf popper will also improve your hook up rate. With the bigger mackerel showing up, having a live bait beyond the surf zone may see you tangle with a pelagic.