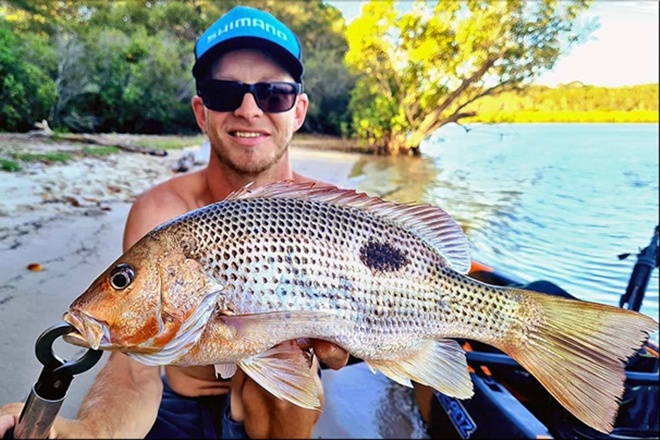 Luke landed a fingermark while trolling the upper estuary in his kayak. All images supplied by fishingnoosa.com.au

Good numbers of whiting are moving along the beaches with some good schools being spotted at Sunrise and Sunshine Beach and caught on cured or live worms. Tailor have been caught on sunset and after dark at the third cutting and up at Double Island point on the Northshore beach along with the start of our annual dart run. Small school mulloway will start to show up along the metro beaches and if you use bigger baits like mullet fillet or similar you can hopefully attract the better fish, remember big bait big fish!(usually). Peregian beach has been good for whiting, dart and the occasional tailor plus a bonus with some nice flathead caught on the low tide.

Tailor have been on the chew inside the Noosa River especially around the river mouth and the Woods Bays area. This happens most years here in Noosa with the fish making their way back after spawning along the Fraser Coast.  The tailor will bite on surface lures early morning and late afternoon and will eat an unweighted pillie as well.

Trevally are also on the bite in the same areas with some good GT’s also been found up around the ski run at Tewantin early mornings as the sun is rising. Munna Point has also  been fishing well for trevally and tailor along with  early in the day as well so it pays to stay mobile if you are land based. Casting slugs and micro Jigs from these area can also work well as the fish feed aggressively in the low light hours.

Good whiting have been entering the river and are being caught on live worms and yabbies in the frying pan area. Whiting lure fishers are doing well on the start of the incoming tide on the sand flats using the Mmd Splash Prawns and the ever reliable Sugapens.

Upriver the jacks are really firing, the area between the lakes, these fish are the brawlers of the rivers and pound for pound are one of the toughest fighters out there.  Live baits of poddy mullet or herring cast around structure will get quickly gobbled up by jack but hooking them is only half the battle, getting them out of there snaggy homes is when the reel fun starts, using good quality eight carrier braid of around 20lbs, and a fluorocarbon leader up to 25lb will give you the tools to stay in the game. For the dye hard lure anglers red suspending lures are very popular and are usually the first to hit the water, the Sugadeeps and the Zerek Tango Shades have been flying off the shelves with some great results.

With the arrival of the first Spanish and spotty mackerel plenty of angler have been out chasing those bait schools looking for their first pelagic’s of the season. Reports have been there with plenty of undersized spanish and some good sized spotties on offer. Tuna have also been chewing with most being Mack with the odd long tail amongst them.

The inshore reefs have been fishing really well when the conditions allow. Plenty of cobia have been caught at Sunshine Reef along with sweetlip, snapper and moses perch with a few coral trout starting to show up and expect similar fishing at Chardon’s reef.

North reef produced snapper some big pearl perch and sweetlip plus check the FAD and if it’s not a parking lot have a go for some mahi mahi on the change of tide.

Halls reef has been good for sweetlip as well as cobia and the odd snapper still hanging around.

Trips to Double Island are well worth the effort when the conditions allow with good catches of tusk fish snapper pearlies and dolphin fish on the closer in drops. Out wider the Hards and Barwon Banks are fishing well with snapper cobia and pearlies on days when the current hasn’t been pushing too hard.

Lake Macdonald has been fishing well for bass try the bubble trail using jigs and blades or fish the edges as the water is warming up if you are chasing saratoga. Yellow belly have been responding to trolled hard body lures with bright fluoro colours working best in the late afternoons. Two tourist Kayakers from Italy were exploring the lake last week and were pleasantly surprised when there trolled lures were constantly being hit by large bass by the end of the day they had caught and released over 20 fish.

Davo’s is giving away a Suzuki 20Hp 4 stroke Tiller Steer outboard motor. Motor is fitted with electric start, power tilt and trim and comes complete with a fuel tank. Total value of the package is just under $6000. Simply spend $100 or more in a single transaction in any of our store and you are in the draw.

All images in this article are supplied by the Fishing Noosa website.