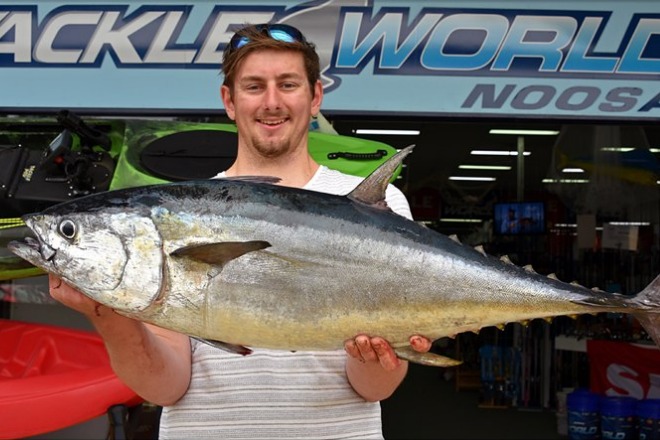 WITH it being the last week of the school holidays families were out in force along the Noosa River.

After last week’s rain the water now has a bit of colour to it and the fish seem to be feeding that bit more aggressively. Large flathead are still in great numbers and taking soft plastics like the River2Sea Chase Baits, the 3” curly baits have been working well around the river mouth sand banks, on the ski run, and Weyba Creek.

Whiting have been keeping the kids happy with live worm baits and live yabbies producing some quality whiting in the lower reaches like the dog beach, the frying pan and Gympie Terrace. Bream have also been a favourite with the kids and prawns and mullet flesh has claimed some nice fish. Mangrove jacks are beginning to feed at night around the heavy structure. Live baits and 4” paddle tail plastics being the best method to target these fish. Trevally have been a little slow over the past weeks but with some colour in the water are making a fast return, most fish landed have been of the big eye variety. Crabs are starting to walk after last week’s rain, the deeper sections of the river near mangroves is the best place to put your pots baited with fresh mullet.

On the offshore seen angler have had some great opportunities to get out in some very favourable conditions. A lot of larger craft made the run out to the Barwon banks, pearlies, snapper and trag jew were all landed. For those that did the run up to the reefs east of Double Island Point, red emperor, pearl perch, snapper and cobia were all accounted for. North Reef saw some nice snapper and pearl perch landed. Cobia seem to be everywhere at the moment. There always seem to be a real presence of cobia when the whale are migrating. Live yakkas have been the best bait on a floater rig.

There are still some great sized tailor along the Noosa North Shore, these fish will be making their way south after spawning up at Fraser Island. Pilchards, mullet and bonito baits have claimed some quality fish up to 3kg.  Smaller jew are also on the chew on the North Shore , with the new moon last week they tend to move into the shallow gutters under the cover of darkness to feed on smaller baitfish and smaller tailor. Whiting, bream and dart have in habited the closer gutters making great fun for the kids, worms, prawns, pippies and yabbies have claimed most of the fish.

In the freshwater; lake McDonald has still seen good schools of bass in the deeper sections down towards the dam wall, vibes like the Jackal TN60 and paddle tail soft plastics have claimed some nice fish. In Lake Borumba the bass are also schooled in the deeper parts of the dam and are feeding on the Instinct Red Eyes as well as ice jigs and deep plastic presentations.

The first ever Gone Fishing Day will be held on the 16th of October 2016. This is a day when all Australians can get out on the water for a fish and celebrate our love of fishing. It doesn’t matter if you have never fished before, Gone Fishing Day is for everyone. So why not sign up for the biggest fishing event on the Australian fishing Calendar. Jump on line and check it out and register at https://gonefishingday.org/