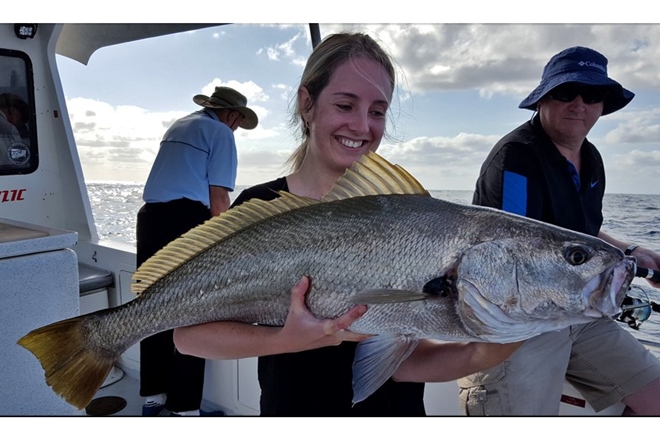 With the perfect spring weather we experienced over last weekend, anglers were out in force. Some good-quality flathead continue to entertain anglers in the lower reaches of the Noosa system as well as Lake Doonella. Bouncing soft plastics along the bottom or trolling the contours in two or three metres of water on the run out tide has seen some quality big females raised. Drifting small pilchards or froggies around the Frying Pan and the river mouth has also accounted got some quality flathead. Whiting are also in good numbers with Gympie terrace, the Dog Beach and the Frying Pan all fishing well. Freshly pumped yabbies or live worms have claimed some quality fish.

Mangrove jack continue to be on the prowl with live baits still the best bet. Snag bashing with suspending hardbody bibbed minnows has also worked a treat. Get those casts in nice and close to the snag or structure and crank that lure down to suspend in front of the fishes face, a little tweak will also keep the lure working. The Strada Dredge 70 is well worth a try. Mud crabs are starting to make regular appearances as the water warms up in the upper reaches. Fresh mullet with a hint of tuna oil is the best bet.

Heading offshore; Double Island Point has seen excellent catches of quality snapper, pearl perch, tusk fish and Maori cod, with the deeper reefs delivering red emperor and scarlet sea perch. North Reef has also produced some quality fish including snapper and scattered cobia whilst Sunshine and Chardons Reefs have delivered the goods with grassy sweetlip and tusk fish. Further afield the Barwon Banks and the Hards have seen good catches of snapper, big tusk fish and a few spangled emperor. The mackerel are starting to show with some nice spotted mackerels in Laguna Bay along with long tail tuna. Fast moving slugs and stick baits have pinned some good fish.

On the beaches the constant northerly has been a bit of a pain, but for those that got out early before the breeze came up were able to targeted tailor, good sized fish came from the North Shore up past Teewah down towards the mouth of the river and off the headlands.  Ganged pilchards, bonito or mullet fillets were the pick of the baits. For the families whiting and dart came from most of the gutters along the Sunshine Coast beaches with live worms and pippies the perfect baits.

In the freshwater; Lake Macdonald has seen quality bass well over 40 centimetres belting surface flies with gusto. Trolling the old creek bed with small bibbed minnows such as the Zerek Tango Shad has also worked on the bass and the occasional yellowbelly. Borumba Dam has produced some excellent saratoga to 70 centimetres on fly and spinnerbaits, the Baseman range is perfect for the job with purple skirts working well along the edges. When the sun is higher in the sky tyre to cast to the shadier areas.

Now for all the  latest information, log onto www.fishingnoosa.com.au for up to date bar and fishing reports, don’t forget to drop into Davo’s Tackle World in Noosa or Davo’s Northshore Bait & Tackle at Marcoola to find out where the fish are biting, and remember Tight Lines and Bent Spines!