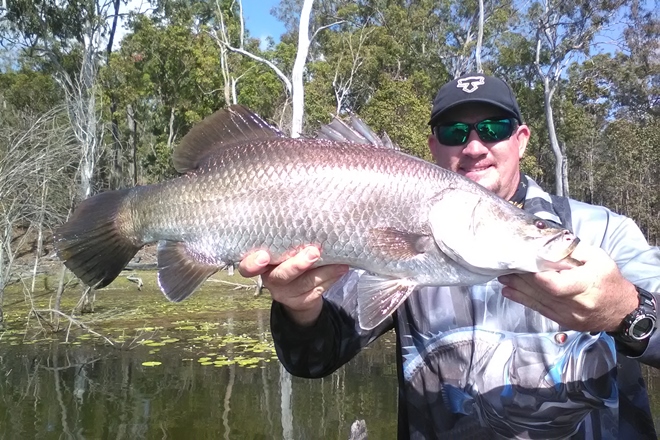 Dale Smith with the 72cm barramundi he caught at Lake Monduran last weekend.

Well, aren’t we lucky to be living in this magic part of the world?  The days are warming up and this weekend the weather is looking great to get out and wet a line somewhere around the Bundaberg region.

The first of the Coral Reef Fin Fish Closures will start on Friday, 28th October and go through to Tuesday, 1st of November.

Luckily, there are plenty of other options to get out and catch a feed.  The river mouths and just offshore are still producing good numbers of big school mackerel.  Floating unweighted pillies out on ganged hooks has been a red hot technique this week.

Further upstream there are still good numbers of three-tooth jew, heaps of flathead and more and more mangrove jack and barra showing up, testing anglers’ skills over the past week.

By all reports, a few nice mud crabs have been caught in the Kolan and Burnett rivers, so this could be another option to fill in the weekend.

On the freshwater scene, Lake Wuruma out near Eidsvold has been producing plenty of red claw and a few yellowbelly and bass.  There is free camping available, but just keep in mind that stays are restricted to a maximum of two week at a time.  More information is available on the Sunwater website at http://www.sunwater.com.au/__data/assets/pdf_file/0004/18058/SunWater-Wuruma-Dam-Visitor-Brochure.pdf

Just up the road near Monto, Lake Cania is fishing fantastic.  Good numbers of big bass and saratoga have been very active.  Spinner baiting the edges has been a very effective method of catching both species.

Closer to home, Lake Gregory has been on fire.  Big bass have been smashing surface poppers at first light and on dusk around the shallows.  Other hot techniques have been using spinnerbaits, tail spinners and three inch soft plastics, also cast around the edges of this magic little impoundment.

What a difference a week makes!  The water temperature at Lake Monduran last weekend was up around 26 degrees, which I believe is the perfect temperature to get the barra actively hunting.  Last Saturday, we managed to land three barra up to 72cm for the morning, with the hot lures being Rapala X-Rap 12s and the Jackall Smash Minnows.  Let’s hope the dam doesn’t flow over this summer and the barra fishing only improves.