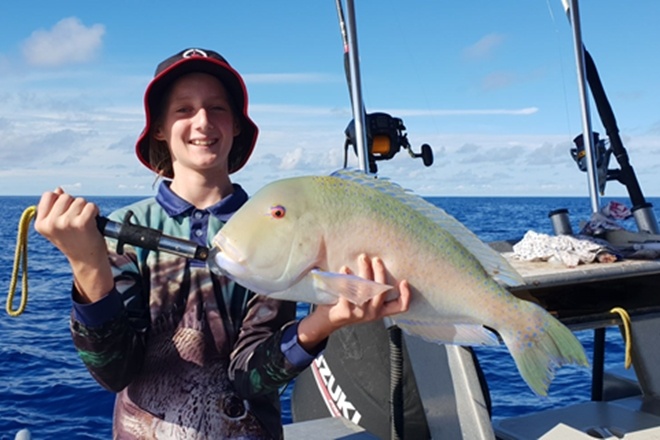 Pick a window this weekend

BUNDABERG INSHORE
With the Australia Day holiday just gone, there has been reports of good numbers of fish caught around the region with the local reefs, rivers and creeks all producing.

The weather this weekend is looking good with a few short windows both mornings.  There is still plenty of school mackerel being caught along the Bundaberg coastline. The local reefs have also been producing some nice grass sweet lip and squire using a range of different live baits, such as pilchards, squid and yellowtail yakkers. Using metal lures, retrieved fast through the schools of mackerel, have been doing the damage. The slow fall jigs for the squire and grass sweetlip and reef species have also been working well.

BURNETT RIVER
With the recent rain the river has been fishing well with a lot of mangrove jack caught on the rock bars in the river around Kirby’s Wall and Tofts Rocks.  There has also been a few nice grunter caught on the rubble beds.  We’ve been seeing some good numbers of flathead caught in the shallow water on the sand banks using the soft vibes and 3”to 4” inch plastics.  The summer whiting have also been getting around.  With this moon phase they will be out in numbers so it will be well worth getting the fresh yabbies and sand worms and drifting the shallow flats.

KOLAN RIVER AND BAFFLE CREEK
The mouth of both river systems have been producing with a big number of flathead and whiting.  The technique being used is drifting the shallow flats on the run in and out tide, with fresh yabbies, beach worms and peeled prawns. There has been a few mangrove jacks, cod and bream caught around the rock walls using live poddy mullet fillets and slow rolled 4” paddle tails.  The crabs have been caught out of the deeper holes and the deeper water in the gutters of the river.

LAKE MONDURAN
With the dam only being at 47% capacity, the fishing has been good with a lot of fish coming out of the deeper water at the deeper points.  There is still some good numbers of fish coming from around the basin. There also has been a few good numbers caught in Jack’s Bay, using the molix 140mm shad in black and gold and the perch colour, using a long cast and a slow roll back to the boat through the timber.  Just remember to have the wind to your back.  When looking for a good spot to fish, the northerly winds produce the best bites so try and plan your fishing trips around the wind and the moon phase; with the full moon this weekend it will be going off.