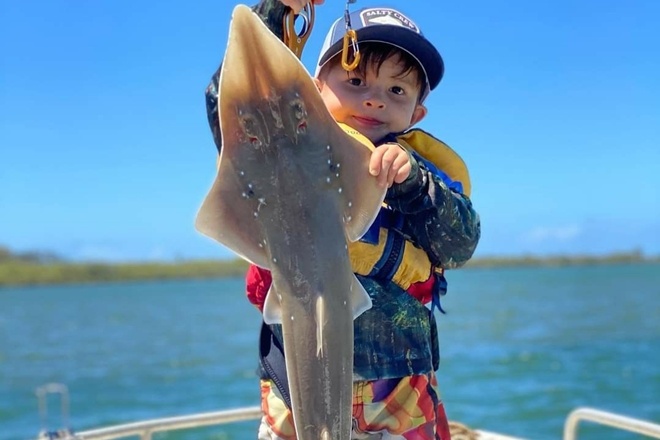 Plan a river raid in Bundy

With the full moon occurring this coming Monday, the fish out at the reefs off Bundaberg should be chewing this weekend.  With the bigger tides in the mornings I’d be chasing the shallower fish such as coral trout and red throat emperor, then fishing for red emperor and other deeper species in the afternoons.  Using pilchards and 5” soft plastics will get you the bite in the shallows and big flesh baits will work a treat in the deep.  Fingers crossed the weather plays the game!

The bait is super thick on all the inshore reefs at the moment, and because of this the mackerel sure have turned up in good numbers. Fast-retrieving spoons vertically off the bottom and floating pilchards down with around 60lb leader should get you into some of the action.  There has also been some nice grunter and grassy sweetlip being caught on the bottom.  Early mornings and late afternoons have been the hot bite times.

The Burnett River has been producing some crazy numbers of cracker-sized flathead.  Slow-rolling paddle tail soft plastics across sand and gravel bars has been doing most of the damage and there’s a high chance you’ll also catch a mangrove jack as by-catch. The crabs are also starting to fire up.  I’ve seen some crackers being caught over the past week and with the full moon tides the crabbing should only get better.

The fishing at Lake Monduran is definitely super exciting at the moment.  There has been some trophy sized barramundi being caught up to 115cm.  Slow-rolling larger sized paddle tail soft plastics over wind-blown points has been getting plenty of attention from the bigger fish.  The Jackall Squirrels and Samaki Redics sure have been catching their fair share of barra, especially in the timbers.  Remember to fish with confidence – you never know when that 1m+ barra will smash your lure!