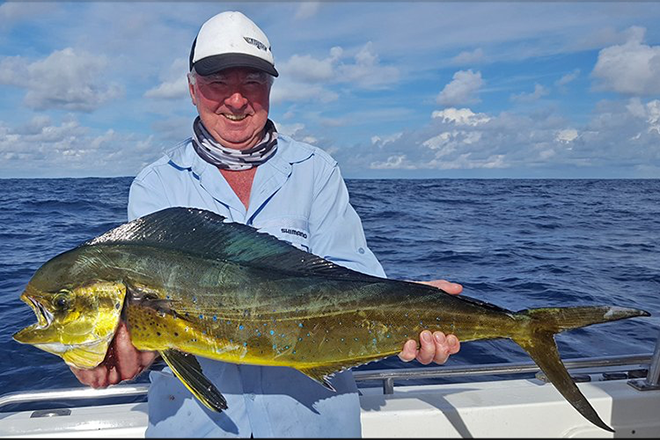 Plenty for anglers on Sunshine Coast

With near perfect weather over the last weekend many angler decided to make the run north and fish the reefs off Double Island, there were plenty of fish on offer including mackerel, long tail tuna, Mahi Mahi (Dolphin Fish), gold Spot Cod, moses perch, sweetlip, pearl perch and good sized venus tusk fish. The Hards and the Barwon banks also fished well with venus tusk fish, squire, hussar, Maori cod, red throat emperor, and some thumper Robinson’s sea bream. For those angler that choose to stay a little closer to home, large numbers of tuna have been caught in the Laguna Bay area as well as the closer reefs, there have been both mack and long tail with fish in good numbers, working the edges of the bait schools has been the most productive with a range of metal slugs on the cast, some of the favourites have been the River2sea Sea rock, ARMA Radico slugs, as well as Halco Twisty’s.

Spanish and spotted mackeral have been being caught around Sunshine Reef on Spanyid Raider 65’s and the Davo’s Spanish Specials loaded with big pilchards or slimies. Trolling garfish using a chin guard has also worked well. Sunshine Reef has also been a great spot for Coral Trout, venus tusk fish, Maori cod, pearl perch, slate bream, moses perch, sweetlip, cobia and Squire. Working baits hard to the bottom has been the most productive for the reef fish.

On the beaches; extra-large bream were on the bite in the gutters around Sunshine Beach towards the top of the tide this week. Fishing frogged mouth pilchards on gang hooks, as well as fresh mullet strips and live yabbies have been the favourite baits. Flathead have also been amongst them along with dart. Up on the Noosa North Shore the dart are also in great numbers, these fish are great for the kids as they are pretty close in and can be cast to with a smaller beach outfit.  Peeled prawns, fresh mullet strips, live worms, pipis and squid have been the baits to use for them.

In the Noosa River the recent rains have really improved the fishing with plenty of species on offer, down towards the mouth the whiting have been in good numbers, live worms and yabbies have been the go to baits, with surface lures like the Bassday Crystal Pops also claiming some great fish.

Bream, tailor, trevally and Flathead have all been present around Woods Bays. Fresh Mullet strips, whole whitebaits, and live bloodworms have been the baits of choice. Soft plastics have also been getting the job done, the keitech range have been perfect for the job and have claimed some quality fish. Mangrove Jacks have also been on the chew around Woods Bay late in the evenings; using free floating baits like frog mouth pillies, live poddy mullet or herring, whitebait and baby blue pilchards has been a productive method. Munna Point has also been a hot spot for trevally and tailor, fishing the deeper hole out front of the Coast Guard has also produced some smaller jew. A little further upriver the Tewantin area has also fished well with Jacks and trevally on the bite, with so many prawns in the river last week, prawn profile plastics have really been firing. Mud crabs have been in great numbers with the deeper sections of the river holding the better crabs, the crabs have been nice and full with plenty of buck in the pots. 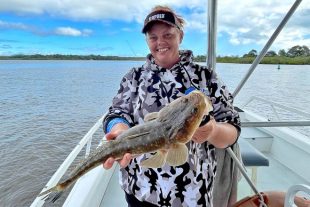