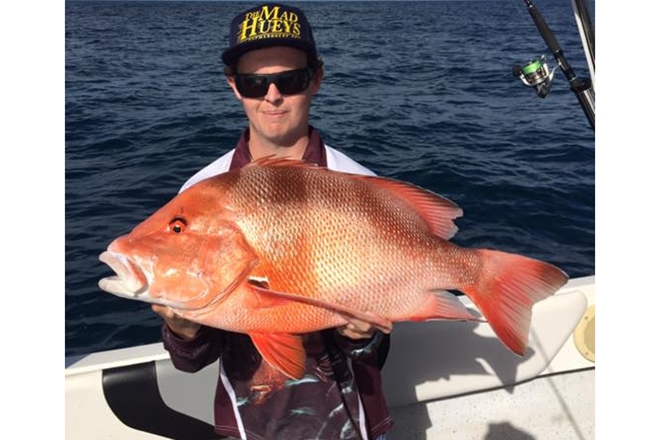 Well, it looks like there’s a chance the anglers around the Bundaberg area may get offshore this weekend.  The tides for the weekend are looking spot on, meaning minimal run, making it easier to fish most of the smaller patches of reef.  Hopefully the fish will be on the chew.

During the last lot of good offshore weather we had, there were plenty of fish caught including some big red emperor, coral trout, sweetlip and parrot.

There has also been plenty of spanish mackerel about, so it will be worth floating a bait out.  Fingers crossed that the weather stays good.

As for the local rivers and creeks, they are also fishing well with big grunter still being talked about.  Most of the grunter are coming out of the Burnett River, and most have been caught on Blades and Gulp soft plastics.

Reports have also shown a good number of whiting and flathead from around the sand flats with the first of the making tide being best. Some of the rock walls have produced a small run of bream and a few large mangrove jacks, with most of the jacks being caught by live-baiting.

There seems to be plenty of prawns getting about the rivers.  The prawns are of good quality and seem to be easy enough to catch when you find them.

Lake Monduran has really fired over the past few weeks with plenty of barra being caught.  There have been quite a few barra from 60cm to 90cm caught with a lot of them being found in Bird Bay.  The barra seem to bite best early to mid-morning or late afternoon and into the night.  Most barra have come off the points leading into the lays.  Jackall Squirrells and Zerek Flat Shads have been the stand-out lures for barra in Lake Monduran.

Lake Monduran Sponsor A Barra Inc. are raising funds to do a feasibility study on putting in place an electronic barrier to prevent the barramundi being swept over the dam wall in the event of a flood.  If this barrier goes ahead, it will be the first of its kind in Australia.  To donate or find out more, go to the Go Fund Me page at https://www.gofundme.com/3dask68

You can also help spread the word by liking and sharing the Facebook page at https://www.facebook.com/Lake-Monduran-Sponsor-a-Barra-Inc-893943397360642/

For more information you can email Julie at sponsorabarra@gmail.com