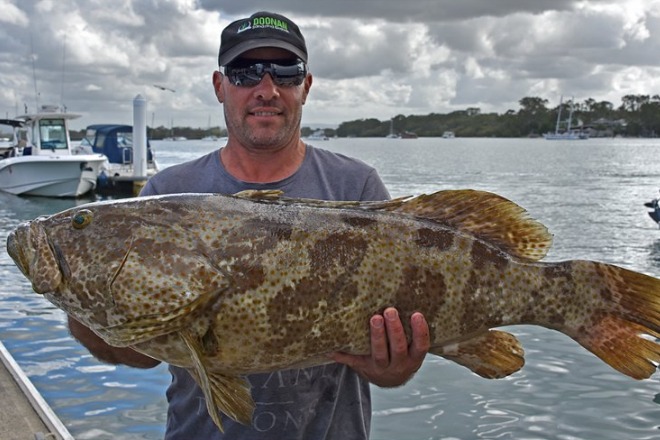 Plenty of Trevally in the Noosa River

The Noosa River over the last week has been the place to be if you love chasing trevally, good sized giant trevally have been coming from around the Coast Guard boats near Munna Point as well as Inner Woods Bay.

Surface presentations have been the way to go with smaller surface walkers like the River2sea Scum Dogs and Surface poppers like the Davo’s River Poppers. When fishing these smaller surface lures it is a good idea to upgrade the trebles to cope with the bigger fish. Smaller golden trevally and tea leaf have been throughout the river eating 3 inch plastics and small vibes like the 6cm Entice Assaults. Bream numbers in the river are increasing as the water temperature slowly drops. Small grub pattern soft plastics or lightly weighted flesh baits have been fishing well around structure like bridges and pontoons. Jacks are still feeding and are taking mainly live baits with the night angler having the most success. Tailor are also taking live baits throughout the river with the river mouth in the low light periods your best bet.

Offshore the mackerel are still here even though the water temperature is starting to drop, Halls Reef has seen some nice spanish mackeral with most caught on live yakkas. North Reef has also seen spanish, spotted and school mackerel on pilchard and live bait floating presentations. On the bottom at north Reef, Snapper and pearlies cod and spangled emperor have also been caught. Chardons Reef has seen good numbers of spotted mackerel as well as snapper and jew coming from the bottom. Sunshine Reef has been the spot for coral trout. Live baits fished hard on the bottom has been the best approach. Heading up North; the reefs east of Double Island Point have seen some great fish hitting the decks including amber jacks, cod, snapper, pearlies and red emperor.

On the beach; we are starting to see some good schools of tailor moving up the eastern beaches with the low light period, prime time. Good sized bream and dart have been taken on live worm baits around the Peregian Beach area. Tailor and dart have been in good numbers south of the first cutting on Noosa’s North Shore.

In the freshwater; bass have been congregating around the weed packed edges of Lake McDonald. Small surface lures and spinnerbait have been successful. Good cod have been caught on the troll in the deeper areas of the lake, give the Slick Backs from Wilson a go, these deep diving lures will pull down to 6m plus at around 6 knots.

Now for all the latest information log onto fishingnoosa.com.au for up to date bar and fishing reports, don’t forget to drop into Davo’s Tackle World in Noosa or Davo’s Northshore Bait & Tackle at Marcoola to find out where the fish are biting, and remember Tight Lines and Bent Spines!