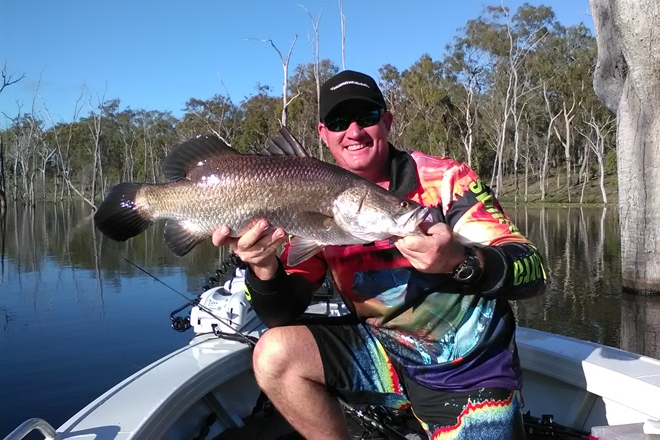 Dale Smith with the 69cm barramundi he caught at Lake Monduran last weekend.

Prawns and Barra in Big Numbers around Bundy

Well, another week has passed and it’s been awesome to see so many boats out on the water around the Bundaberg region, making the most of the school holidays.

At this stage, the forecast for this weekend is looking good with light winds and mostly sunny days predicted, but please keep an eye on the weather conditions as things can change. Most of the activity on the Burnett River this past week has been anglers netting for prawns that seem to be in big numbers and of a good size. Some of the hot spots have been around Millaquin Mill and up towards Splitters Creek. If you haven’t got into them already, this weekend could be a chance to dust off the cast net and try to catch a feed.

With all the bait in the Burnett at the moment, it seems to be attracting the bigger predatory fish further upstream. The quality of the bream being caught at this time of the year is fantastic. Bream between 35cm and 40cm have been common, with most of the rock walls holding good numbers of fish. A few nice flathead, grunter, mangrove jack and barramundi have been caught all through the river with some of the better fish being hooked around the Tallon Bridge. In the town reach there’s been plenty of tarpon, trevally, queenfish and even a few chopper tailor smashing bait fish near the surface, which is tremendous fun on light gear.

Both the Kolan and the Elliott rivers have also been producing the goods. Both systems have fished well with some nice prawns as well as a few mud crabs, bream, whiting, flathead and the odd mangrove jack being caught. This has provided plenty of action for the local residents and campers over the holidays.

Good numbers of Australian bass have been very active at Lake Gregory. The water temperature is just starting to fall, and this will see the bass school up even better towards the deeper parts of the lake. Small blades, tail-spinners and soft plastics are deadly on Aussie bass and this should only improve over the next few months.

Anglers staying at Lake Monduran have seen the barra become a little more active over the past few weeks. Barra up to the magic metre have been testing the skill and tackle of anglers, as fish of that size will find any weak links in your gear. I managed to land a small barra last Sunday morning on a Jackall Squirrel. On the Humminbird side-imaging sounder we saw heaps of barra starting to venture back up onto the shallow flats, so things look good for Monduran over the coming months.