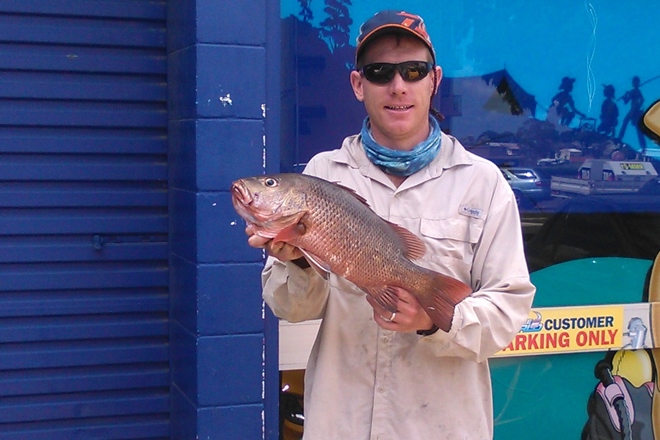 Wayne Bryant with the 53cm mangrove jack he caught in Baffle Creek recently.

Well, the forecast for this weekend for the Bundaberg area is not looking too flash at this stage, with some moderate north-easterly winds predicted.  As always, just keep an eye on the latest forecast to see how this pans out. Over the past week everyone has been talking about the prawns that are around in good numbers in all our local rivers and creeks.  With the full moon on Sunday night, it should be a fantastic chance to go and have a crack for some prawns this weekend.  Some of the hot spots in the Burnett River have been Rubyanna Creek, Strathdees and around Austoft Rocks, which have all been producing the goods with good sized river prawns being caught.

When casting for prawns using a cast net with a top pocket can make the job a lot easier as 90% of the prawns usually shoot up to the top of the net. With all the bait in the rivers at the moment the fishing has also improved.  Mangrove jack have been really aggressive this past week with some real crackers caught.  I know that Wayne Bryant fished the Baffle early last week and in a three hour session landed three or four nice jacks to 53cm, all on soft plastics.  So, that could be another good option this weekend.

The Burnett is full of prawns and bait which are drawing the bigger grunter, jacks and flathead to our rivers.  The bigger grunter are just starting to show up in good numbers and targeting them on soft plastics and small blades can result in some amazing action. Next week with the school holidays being finished, it might be worth putting some crab pots out as there might be less people on the water.  The Kolan has the dirtiest water at the moment, but it is probably crabbing the best.

On the fresh water scene, Lake Gregory’s bass are being caught in good numbers.  Last weekend a few local lads did well with a 20-fish session by using small blades and tailspinners in slightly deeper water. The barra at Monduran should also fire up with the northerly winds and the full moon approaching.

Just finally, congratulations to Dustin Sippel who won the Basstastic Barra round held at Lake Awoonga.  Dustin is a local lad and has won that competition for three years in a row.