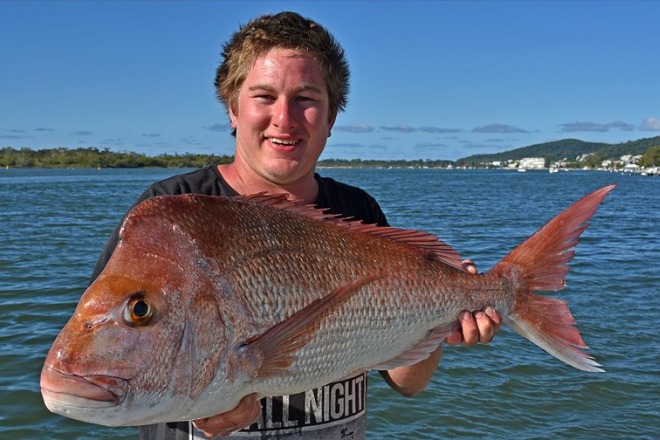 Prime Fishing Conditions over the Last Couple of Weeks

Offshore angler over the last couple of week have been in heaven, whether it be fishing the bottom for reefies or surface for pelagics, angler have cleaned up!

Fishing for reef species on sunshine reef has seen sweetlip, squire and coral trout all in good numbers. The tax man in the grey suit “Sharks” are still thick and seem to preferring trout over any other fish. One of the keys thing is, don’t overdo the burley as this will increase their numbers.  Mackerel are in good numbers with tuna and wahoo also in the mix. North Reef has seen some great catches of spanish mackerel caught on the troll, once you have found the fish on the sounder high speed spinning of 60g and 90g Arma slugs is also proving productive.

Large tuna schools are in Laguna Bay. Longtail, yellowfin and mack tuna are being taken on smaller slugs around the 15to 20g mark. Retro fitting these lures with single hooks has been providing more secure hook ups. Squire and pearl perch being taken from the reef east of Double Island Point. The Barwon Banks has also been firing with some larger snapper and pearlies.

The Noosa River is also fishing well with angler enjoying the near perfect conditions. Good numbers of whiting have come from the Gympie Terrace stretch, the Dog Beach, Frying Pan and Weyba Creek.

Quality flathead have been caught by drifted baits like frog mouth pilchards around the deeper edges of the sand banks in the lower stretches of the river, with the outgoing tide the best time. Golden trevally have been taking mullet flesh and prawn baits from the River Mouth Rocks. Tailor have also been taken from the river mouth during the low light periods. Large mangrove jacks are keeping night time anglers on their toes. Large paddle tail plastics like the Samaki Boom Baits 4” Bomb Shad fished around structure on the outgoing tide has been accounting for some monsters. Quite a few sand crabs have made their way into pots in Weyba creek and Lake Weyba itself. Fresh mullet being the draw card bait.

On the beach the southern beach have been preforming well over the last week. Quality tailor have been coming from Castaways Beach with the low light periods producing the best fish. There has also been a couple of jew from the same area, Fresh mullet slabs, bonito and tailor fillet have been the go to bait. The northern end of Sunshine Beach has producing good bream, whiting and dart on live worms and prawns. Gutters along the Noosa North Shore are also producing bream, whiting and dart.

In the fresh water, Borumba has seen good saratoga fishing on spinnerbaits and surface lures up the Yabba and Kingham arms of the dam. Bass are schooling up and taking tail spinners near the main basin. 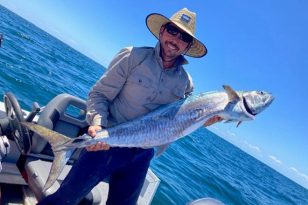 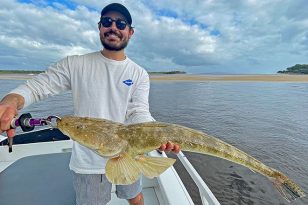