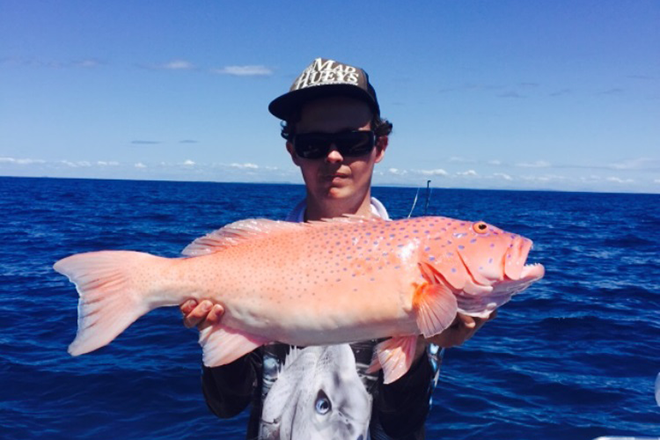 Quality fish on offer around Bundaberg

The past week has seen some quality fish caught around the Bundaberg area, from both estuary and offshore.

Last weekend saw a few boats head offshore and a lot of the boats that got out came home with some quality coral trout, grass sweetlip, parrot and a few big spanish mackerel. There is heaps of bait offshore at the moment and this is what has kept the reef fish on the chew.

Most of the estuaries are fishing well for bream, whiting, flathead and some big grunter, but it’s the Burnett River that has continued to produce some great fishing.
The first of the run-in tide has seen good numbers of sand whiting and plenty of good sized flathead moving about the sand flats.  Fresh yabbies have been working well on the large whiting, and soft plastics have been doing the job on the big flathead.

The rock walls have held good numbers of big bream and some monster grunter are also being caught.  There are still a few blue salmon about, but they are coming to an end, and the ones being caught have all fallen victim to soft lures. The upper reaches of the Burnett have seen plenty of whiting, flathead and an odd mangrove jack, and the jacks will only get better as the warmer weather approaches.

The water level in Lake Gregory has been topped up and the bass are on the chew, with most of them coming from the middle of the dam on small soft plastics and blades. Lake Monduran has continued to produce big barra during these warmer northerlies, with most of the barra coming from the entrance into the northern arm of “B” section, on Jackall Squirrels and Smash Minnows.

It’s now only a few weeks until the annual Win Television Monduran Family Fishing Classic will be held on the 15th and 16th of October.  With $1,000 cash for the biggest barramundi caught and a boat, motor and trailer package, along with heaps of other lucky draw prizes, this is always a fun family weekend.