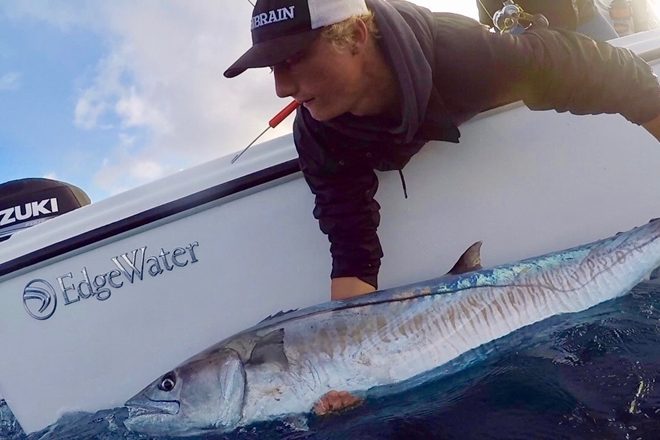 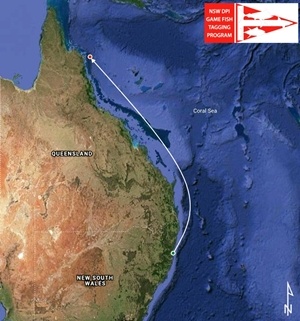 A Spanish mackerel originally tagged by gun fishing father and son team Vic and Zane Levett has gone on to be recaptured.

Zane (pictured) caught the fish during a hot bite on the NSW Mid North Coast back in April 2019. Estimated at 13kg, the mack was quickly subdued on relatively heavy tackle. The fish was brought alongside the boat where the hook was removed and it was tagged. After a quick couple of photos, the Spaniard was swum boat side and subsequently released in excellent condition.

Fast forward to 29 October 2020, the fish was recaptured by well-known game fishing boat Kekoa, which is operated by Luke and Kelly Fallon. Crew member Heath Irvine (pictured) was tasked with providing dinner for charter clients while the boat was anchored near the No.10 Ribbon Reef, offshore of Lizard Island in Northern Queensland. After a quick swim, Heath managed to spear this well-conditioned Spaniard, which provided several quality meals for both clients and crew.

Once the fish was brought aboard, the tag was noticed, and quickly reported to us. Upon recapture, the fish weighed 16kg. The fish spent 566 days at liberty and was caught more than 1050 nautical miles (about 1940km) from its original release location. There have been more than 100 reported recaptures of Spanish mackerel, but this fish sets a new record for the furthest distance travelled by a tagged Spanish mackerel since the Game Fish Tagging Program began in 1973.
The NSW DPI Game Fish Tagging Program is run using funds from the NSW Recreational Fishing Trust. More than 490,000 fish have been tagged under the program so far. If you’d like to get involved, please phone (02) 6691 9602 or email gamefish.tagging@dpi.nsw.gov.au