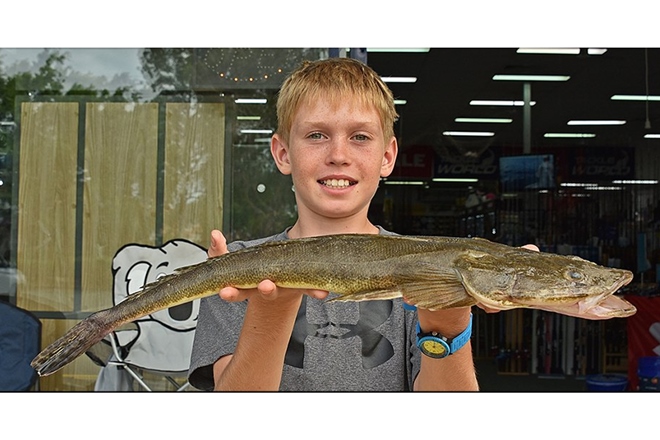 Jameson Blayney caught his first-ever flathead on Sunday and at 55cm it was a nice fish. Photo: www.fishingnoosa.com.au

With the recent weather events it is quite obvious that offshore anglers have been a little challenged when it comes to getting outside. Most anglers have been getting out early to try to beat the southerly breeze that has been springing up mid-morning. Sunshine Reef has still been producing the odd spanish mackerel, and it has also been a great spot for Coral Trout, venus tusk fish, Maori cod, pearl perch, slate bream, northern Bluefin tuna. Octo jigs have accounted for Moses perch, Grass Sweetlip and Squire. The odd school of keeper size Cobia have also been cursing around. Long tail tuna are in great numbers and have been caught in Laguna Bay area, the dead giveaway is the bird activity which can you easily see from Noosa Main beach. The key to getting onto tuna is to cast your lure to the edges of the schools rather than right into the middle, the fish are taking a range of metal slugs on the cast; river2sea sea rock, ARMA radico slugs, weighted and floating stick baits. For the larger boats that have headed a little further afield, Double Island has still been fishing well for Long tail tuna, Mahi Mahi, gold spot cod, moses perch, sweetlip, pearl perch and good sized venus tusk fish. The Barwon Banks have also  fished well for snapper, venus tusk fish, squire, hussar, Maori cod, red throat emperor, gold band snapper and the odd red emperor.

On the Beaches, Bream were on the bite in the gutters around Sunshine Beach towards the top of the tide over the last week. Flathead have also been in the gutters taking frog mouth pilchards on gang hooks, as well as fresh mullet strips. Dart are still spread all along the beaches with the top of the tide the most productive. Great fun for the kids is to get them casting metal lures like the Halco twisty’s, the way the dart are at the moment they will hit a fast moving slug with the added benefit of tailor and trevally also in the same area.  Great sized whiting have been coming from the beaches near the river mouths. Live worms, pippies and pealed prawns have been the bait of choice.

In the river; with the water being the colour it is, the run in tide has been the most productive. Whiting have been in particularly good numbers with the amount of bait in the river. As whiting are predominantly bottom feeders and with the amount of water moving through the system at the moment  there is good amount of food for them to feed on. Trevally are also on the chew, and Woods Bays have been full of them! Schools of baitfish are regularly chased around by hungry trevally and are easily spotted by looking for splashes on the surface. Small surface popper like the River2sea Bubble Pops and surface walkers like the Cultiva Zip and Ziggies have been doing most of the damage. Soft plastics imitating a prawn seem to be a very popular option at the moment as there are plenty of prawns starting to run. For the night angler creeping quietly around structure like Tewantin Harbor and the structure around the sound should see you tangling with mangrove jack. Fishing a slow rolled paddle vibes around the deep holes in the river will also give you a really good chance of tangling with one of these prized fish. If you love your bait, then give free floating baits like, frog mouth pillies, live poddy mullet/herring, whitebait and fresh mullet strips a go. For the crabbers there have been an abundance of crabs around with the fresh water in the system, mud crabbers try the deeper sections near mangroves while for the sand crabs set your pots a little closer to the mouth. Of course the best bait is fresh Mullet.