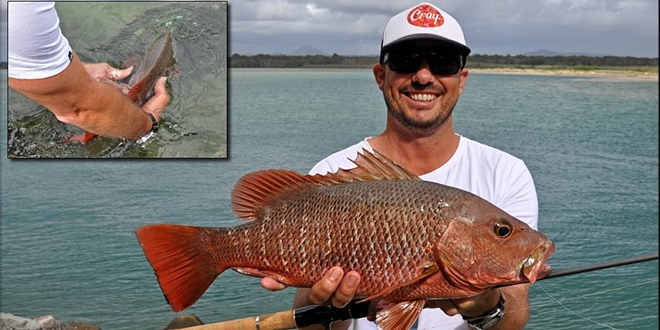 Craig Morley won the $50.00 Davo's Fish of the Week prize with this 55cm mangrove jack he caught and released at the river mouth.

Inshore Reefs have been firing after the recent rains as bait fish make their way out of the rivers to find more saline water.

Sunshine Reef has been fishing well with good catches of sweetlip, snapper, some nice coral trout (even a nice coronation trout reported), tuskfish, and longtail tuna.

Micro jigs have been accounting for a great mixed bag of reefies as well as pelagics, Sunshine Reef is perfect for this style of fishing.

A lot of anglers are starting to opt for an overhead style micro jigging outfit as you can detect bites easier on the drop and reengage the reel quite quickly.

Attaching a small treble on the rear of your micro jig will increase hook up rates dramatically and won’t alter the flutter of the jig too much.

Soft plastics are another great way to get into some quality fish at Sunshine as you can use relatively light tackle.

There’s been excellent numbers of tuna over the last week.

Carrying a variety of size and type of lure is always a good idea when chasing tuna.

A mixture of small metal slugs, micro jigs, soft plastics and poppers and stickbaits is ideal.

The tuna have been quite willing to take larger lures of late with poppers and stickbaits being a very visual and exciting way to catch them.

Some of the favourites have been the Strada Howler and Strada Torment, Cotton Cordell pencil poppers and Daiwa Over There Skipping stickbait.

Mackerel have been quite thick with good catches of spotted and Spanish mackerel coming from North Reef and Chardon’s Reef.

Sounding up schools of fish and dropping metal slugs and micro jigs is a great way to entice a bite and can be very productive.

In the river, whiting have still be in exceptional numbers and have been a great target for the youngsters on school holidays, the incoming tide will be your best bet with the clearer water coming through.

Whiting are a relatively easy species to target and are quite safe for the kids to handle as they have no real serious spikes.

Live worms and yabbies have been the go to baits, with surface lures being the real stand out with the bigger fish.

Strada Float Pencils and Fish Candy Skinny Dogs have been popular, when popping for whiting there’s always the chance of tangling with a bream, flathead, trevally or tailor as by-catch.

There has been heaps of golden trevally have started making their way into the river, this should only continue to get better as winter approaches.

Some cracking mangrove jack have been landed around the sand bags and the rock wall at the river mouth.

Hopping soft vibes like the Fuze Pulse and Fish Candy Jack Hammer is a good way to chase the red devils especially when the water is a bit dirtier as they give off plenty of vibration.

Now for all the  latest information  log onto www.fishingnoosa.com.au for up to date bar and fishing reports and don’t forget to drop into Davo’s Tackle World Noosa or Davo’s Bait &Tackle Northshore at Marcoola to find out what’s biting and where, and remember: Tight Lines and Bent Spines!