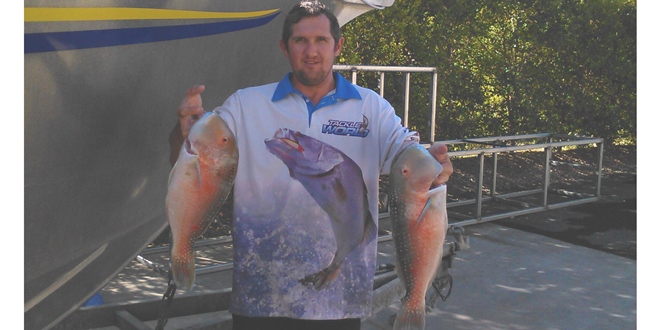 Reef fish on the bite off Bundaberg

The weather forecast for the Bundaberg area for this weekend looks like it will be okay, but the winds will be slightly stronger than the previous two weekends.  This will restrict most of the action to the close inshore reefs and the local rivers and dams.

By all reports any boats that headed offshore last weekend all found the fishing a little tough with the big tides and the amount of run, but most managed to catch a feed of reef fish, including some nice parrot, sweetlip and a few hussar.

By the sounds of it the rivers to the north – the Kolan River and Baffe Creek – are both fishing tough also due to the amount of green slimey weed in both of these systems.

The Burnett River still remains one of the most productive, with good numbers of bream, grunter and flathead caught on both lures and baits.  Some really nice grunter over 50cm have been caught around the Port area, whereas some solid bream have also been boated along both Kirby’s Wall and the North Wall, which looks good now it’s been built right up.

Some massive flathead have been caught during the past week.  Just keep in mind that flathead over 75cm need to be released.  The flathead are responding very well to soft plastics, with anglers having good success on Z-man 3” Minnows in the Electric Chicken colour.

I guess it won’t be long now that the days are slowly starting to warm up, that the mangrove jack will become more active.  It might be a good chance to make sure your gear is up to scratch, and let’s hope this year’s jack season will be as good as last year’s.

Up at Lake Monduran a couple of barra were caught on Jackall Squirrel lures last Saturday morning.  These fish were sitting right up in the shallows in two feet of water where the water is a couple of degrees warmer.