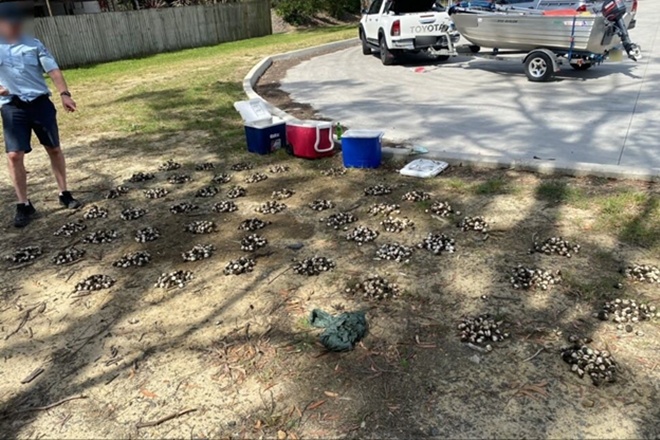 Four people are potentially facing charges in court after being caught with nearly 2500 cockles at Wandandian south of Nowra on the NSW South Coast.
On Monday 5th October this year a concerned person contacted the NSW DPI Fishers Watch service to report a group of people collecting large amounts of cockles in Sussex Inlet.
Local fisheries officers receiving the report continued to liaise with the person who provided descriptions of the people involved and photographs of a boat being used to transport the cockles in eskies to a vehicle at Nielson Lane Boat Ramp.
Using this information fisheries officers attended a service station in Wandandian and intercepted two vehicles containing 4 adults and child, with one of the vehicles towing a boat matching the information. A search located three eskies containing 2447 cockles.
The 4 adults were interviewed and a majority of the cockles seized and returned live to the waters of nearby St Georges Basin. At that time the daily bag/possession limit for cockles was 50 so the seizure represented about 10 times the daily limit for the 4 adults allegedly involved with the offences.
Given the blatant offending fisheries officers are compiling prosecution briefs and the three men and one woman from Sadleir, Parramatta, Cabramatta and Cabramatta West in Sydney are expected to be issued court attendance notices to face charges of exceeding possession limits which carries a maximum penalty of $22,000 and/or 6 months imprisonment.
The daily limit of cockles has since been reduced to 20 by NSW DPI Fisheries after a significant increase in collection in recent years raising concerns about sustainability. The offences were detected as part of Operation Stringray 2 operating since the start of September that targets people exceeding bag limits of cockles and other shellfish in the Shoalhaven/Illawarra region.
Members of the public are urged to report suspected illegal fishing activity by calling the NSW DPI Fishers Watch service on 1800 043 536 or report it online at http://www.dpi.nsw.gov.au/…/com…/report-illegal-activity .