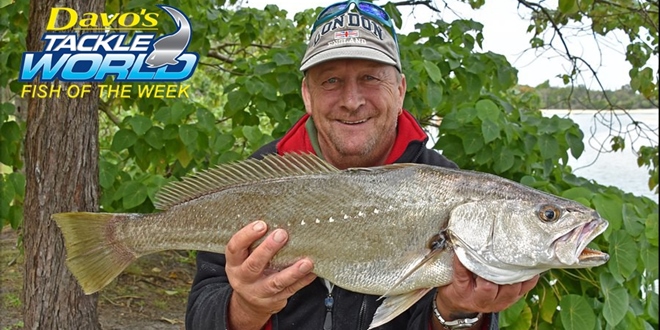 Gary 'Pommy' Maddison won the $50.00 Davo's Fish of the Week prize with this 80cm jewfish which he caught at the river mouth. Photo: www.fishingnoosa.com.au

What a weekend it was last weekend with light breezes and little swell anglers headed offshore in droves.

There have been heaps of snapper and Pearlies around North Reef and Chardon’s Reef with micro jigs a great way to fish this area, and the range of Shimano Colt Sniper jigs have been outstanding and have been temping these great table fish from the bottom.

Sweetlip have been well spread throughout most of the major reefs, with some bigger fish caught during the lower light periods.

There has been odd coral trout on Sunshine Reef, fishing hard to the ref is the best way to come into contact so a running sinker rig with the sinker all the way to the hook should see results.

We’ve seen an abundance of live bait on most of the reefs at the moment’ and where there is bait there’s big cobia hanging around.

In the river the river mouth and dog beach area has been producing great number of quality bream, whiting and flathead drifting both live and dead baits.

Luderick are also on the chew at the River Mouth car park rocks sitting in around the 12 foot mark of water.

Weed can be collected from Coolum rocks. Big schools of trevally have been prevalent throughout the Woods Bay and Noosa Sound area they have been responding well to surface poppers as well as the Jackson range of lures, prawn imitation soft plastics like the Squidgy Prawns have also been doing the job.
Along the Gympie terrace stretch using live blood worms has been producing whiting up to 38cm as well as quality sized bream.

A little further upriver the Tewantin stretch and the first ski run has been producing jew fish in the low lights of the morning and afternoon.

Lures like the Thready Buster vibes have been dynamite on the jew and the odd trevally.

Lake Cooroibah has been producing great numbers of pan sized flathead fishing hard body’s in the shallow water as well as soft plastics.

Now for all the latest information log onto www.fishingnoosa.com.au for up to date bar and fishing reports and don’t forget to drop into Davo’s Tackle World Noosa or Davo’s Bait &Tackle Northshore at Marcoola to find out what’s biting and where, and remember Tight Lines and Bent Spines!