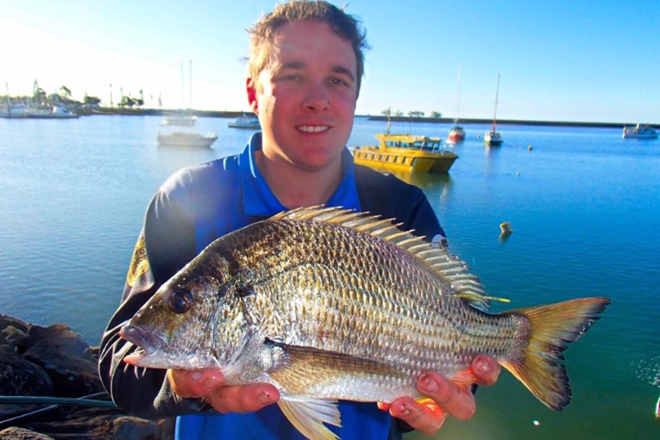 Beau Britton with the 1.18kg bream he caught recently in the Burnett River.

Snapper and Bream in Full Swing around Bundaberg

With the cold weather around the Bundaberg area lately, winter is certainly in full swing, and so are the snapper and bream. A prime location for snapper is the Cochrane Artificial Reef, approximately three nautical miles offshore form Elliott Heads. When heading out, keep in mind that the mouth of the Elliott River is very shallow at low tide, so make sure you leave yourself enough clearance to cross the bar.

When anchoring on the reef, do not anchor on top of the structures as you are likely to lose your anchor.  Instead, anchor upstream so your lines are fishing to the side or back of the structure.  Snapper normally lay on the edges and back of reefs out of the current. Night tides are prime time to catch these fish.  Best baits are fresh squid, mullet fillets, gar and also pike, and in the artificial bait range, try vibes and six inch soft plastics. Creating a berley trail with chopped up pilchards is a great idea.  Your bag limit for these fish is a total of four fish in possession, with a size of 35cm minimum and a limit of only one over 70cm.

The other species – bream – have been captured from the Elliottt River and up the coast as far north as Baffle Creek.  The larger fish, some around 40cm seem to be congregating around river mouths, especially the Burnett River.  Target areas with heavy structure such as rock walls and man-made structures like bridge pylons and pontoons.  Gravel beds can be another option.

If you can put up with the cold, night tides two days before and up to the full moon produces bigger numbers and better quality fish. The best baits are strips of mullet, chicken breast, mullet gut and prawns.  If you’re a fan of artificial baits, the best to use would be three inch soft plastics, small hard-body lures, soft vibes and metal blades. Keep in mind the size and limit for bream is 25cm minimum and the bag limit is 30 fish in possession.