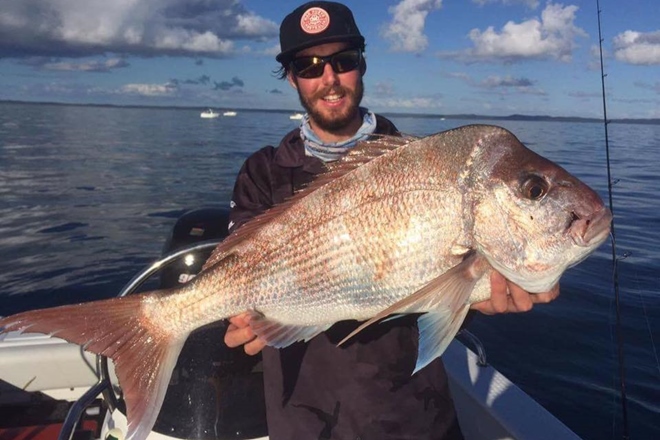 Hayden Kirchner with a nice snapper he caught in Hervey Bay during the week.

Snapper and more chewing around Bundaberg

Looking at the forecast, it’s going to be a ‘wait and see’ kind of moment to see if the weather around the Bundaberg area holds out for some offshore fishing.

Those who have got out over the past few weeks were well rewarded.  Quality catches of big snapper, red emperor and coral trout were all reported, as well as a few big cobia and Spanish mackerel. The rivers and creeks were fishing well, with the Baffle and Kolan producing plenty of grunter and flathead as well as the odd mangrove jack. The Burnett River is still fishing at its best, with good numbers of big bream coming in from along the rock walls.  Most of the sand bars have been producing good numbers of whiting and some cracker flathead, mainly by fishing the making tide.

Further upstream there are still good numbers of grunter and blue salmon with most responding well to soft plastics and metal vibes. There has been the odd mangrove jack about with most being caught on live baits such as mullet or sprat. Rumour has it that there are a few mud crabs about.  Their size is patchy but when you get a good one they are full crabs.

Lake Gregory is fishing well for big bass.  Most have come off the schools holding in the middle of the dam and jigging blades and soft plastics has been working a treat. Lake Monduran has produced a few big barra this past week and will only get better as the weather warms up.