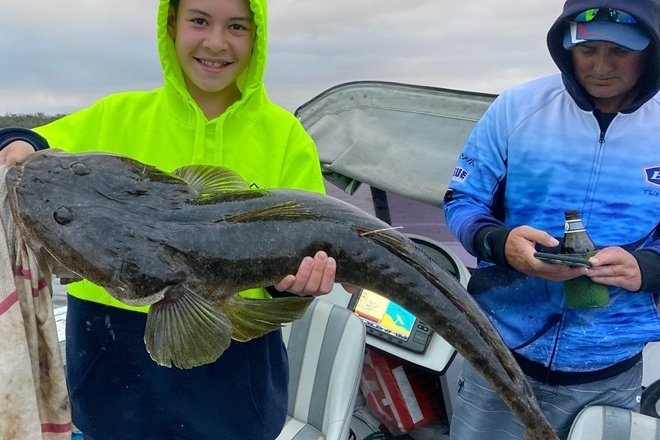 A croc-sized dusky flathead tagged in the St Georges Basin Trophy Fishery has recorded an impressive 10cm growth rate after being recaptured just over three years after it was originally released.

Angler Marley Watson, aged 13, recaptured the 97cm flattie while fishing on the southern side in the Basin on 29 December 2020. The tag details reveal the fish was originally tagged on 27 December 2017 by local fisho Connor Barrett while kayak fishing on the north-western side of the Basin.
Basin tagging stalwart Dave Loose, who was fishing nearby in his boat, assisted Connor in landing the fish, which was measured at 87cm before being tagged and released in excellent condition.
The fish was at liberty for 1097 days and was re-captured approximately 2.3nm from the original capture location. Well-known Sydney charter skipper Matt Reid, of Raptor Charters, was holidaying with Marley and other friends and reported that the fish again swam off strongly after being re-released.
A 10cm growth rate over three years is significant for a flathead of this size. DPI Fisheries research indicates that growth rates for dusky flathead tend to slow after the fish reach “trophy size” of 70cm and above. As is apparent with this recapture, individual fish can, however, record noteworthy size increases.
This latest Basin recapture again highlights the viability of catch & release fishing for large female dusky flathead as a management tool to protect important breeding populations while also allowing multiple anglers to experience the thrill of catching a “trophy sized” fish. For more info on the Trophy Fishery Program, check out https://bit.ly/3ncM7gw.
To read more about citizen science and flathead, click here!