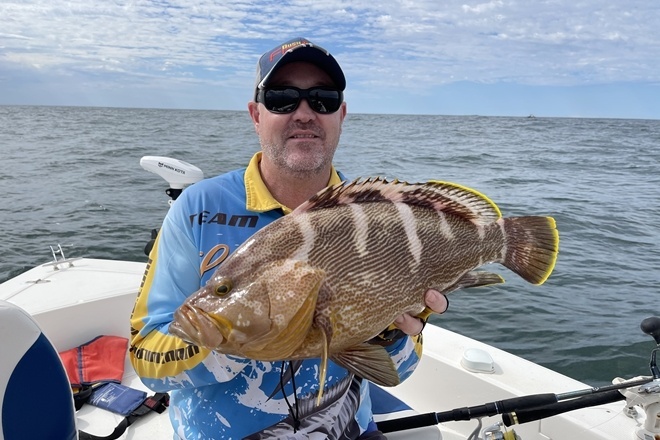 Hi Everyone, hope you have all had a good week, it was great to see some nice weather last weekend and plenty of Fishos out and about making the most of the great conditions. After a bit of rain during the week it looks like we will see the sun return and a forecast of much nicer weather as we head towards the weekend. Saturday looks like the pick of the days so far with the wind picking up for Sunday at this stage. If you are keen to get out for a look let’s, see what’s been biting this week.

With cooler weather on the way trying your luck at catching a feed of Squid is a good option for Fisho’s keen for a feed of Calamari. With the water quality getting back to normal now is the time to try, you can target Squid during the daytime or night-time. I prefer to pick an incoming tide for water quality in the Broadwater closer to the Seaway. You will tend to find the smaller Arrowhead Squid hanging in the deeper water closer to the bottom and the bigger Tiger Squid hanging out in the shallows around sandbanks with weed beds proving shelter and food for the Squid. I recommend an average sized Squig Jig between 2 to 3 inches long depending on what they are feeding on. Metal blade vibration lures work well in the deeper channels near the Seaway south to Marina Mirage area. Land based fishing can be better at night, the key is to find somewhere that has good lighting on the water. Light will attract bait fish which will in turn attract the predatory Squid. Some good land-based spots are Paradise Point Jetty, Grand Hotel Jetty and boat ramp, Sundale Bridge Jetty, Marine Stadium Jetty and the Gold Coast Seaway Rock Walls will all produce some quality Squid.

The Broadwater is holding plenty of bait at the moment, bait fish and prawns have been schooling up in the shallows on high tide then making its way into the deeper the channels as the tide runs out. Keeping an eye out for bird activity is a good way to track bait and find predators to target. Some of the species that have been showing up are Flathead, Bream, Tailor, Tarpon, Squire and Trevally to name a few. A mixture of soft plastics and metal vibes have has worked well to temp a bite.

The Gold Coast Seaway has been fishing well for school sized Jewfish, these fish have been continually active the past few months. Unfortunately, Sharks (The Tax Man) have been a constant issue laying in wait to steal your catch before you get a look in. Mullet schools have started to appear in bigger numbers which is great news as we head towards winter which is their breeding season. The Mullet schools will attack the attention of the bigger Jewfish average size 13kg up to 25kg you just never know what sized fish can show up. Try cast netting the larger Mullet and upgrade your gear and put in some extra time on the cold nights around the Seaway and Wave Break Island and you just may land the fish of a lifetime.

Brad from Brad Smith Fishing Charters reports unfortunately, due to the rain on Wednesday and some family commitments I only got to spend two days on the water. The good news is that the fishing was fantastic and so was the weather with perfect mild temperatures and little to no wind. The water temperature dropped from 22 degrees to 19.5 and this made fishing the deep holes a bit off the pace but by working in shallower water and areas that were draining off the shallow flats that were warmed up from the sun the fishing was very good. This is a handy tip through winter that fish will often migrate and move into areas of the river that has warmer pockets of water. The main catch was once again a bundle of Bream which is going to be a constant reliable species through the next two months, and we caught a heap of Flathead and although there was no trophy sized fish the quality was awesome. The other species we caught were a few Giant Trevally which we caught trolling around the edges of where the birds were bombing the bait schools forced to the surface by the GTs. The best lures this week were pontoon 21 crackjacks, hurricane slams and the ever-reliable zx 40s.

Clint from Brad Smith Fishing Charters reports the fishing was mostly great this week, and we had some perfect weather typical of this time of year. Some rain in between will keep the good fishing times rolling on! I had 82mm on Wednesday and Thursday in the rain gauge here at Bundall. The run-out tide runoff will be a bit dirty still near creek mouths. Water temp sitting around 22 degrees, tons of bait fish and prawns are present in the rivers and Broadwater which attracts many predatory fish. That rain set back the arrow squid activity, but it should not take long to clear with the new moon next Wednesday causing bigger tides. I’ll be looking for the arrows on the run-in tides in the channels and on the Broadwater reefs. Best areas to fish, anywhere there’s water haha, literally fish everywhere.

Gaven from Sea Probe Fishing Charters reports fishing has been red hot this week starting out on the shelf catching Blue Marlin, we caught 4 out of 8 all around 150kg using lures from 8 inch to 15 inch. On the 50 fathoms was also good bottom fishing with Snapper, Pearlies, Ajs, Kingies and also few Dollies around the fads.