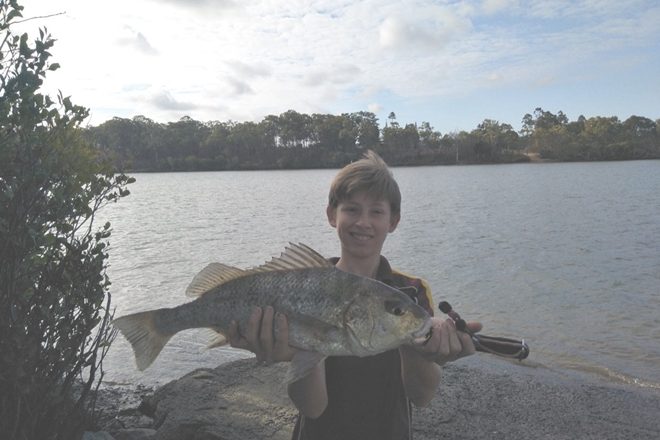 River Felstead with the grunter he caught at Baffle Creek recently.

Firstly, we hope all the Dad’s out there were spoilt rotten and had a fantastic Father’s Day last weekend.  Unfortunately, the weather forecast for the Bundaberg area for this coming weekend isn’t the best, which will restrict most of the fishing action back into the local rivers and impoundments.  Remember to always check the latest forecast before going to throw in a line.

Anglers who put in the effort in the Burnett have been well rewarded with some cracking estuary species caught during this past week.  Now we’re into the second week of spring, more mangrove jack photos are being posted on social media.  A few barra have also fired up and should only get better over the coming weeks.  Bread-and-butter species like winter whiting, bream and flathead have been keeping anglers entertained.  There was a good run of prawns in the usual haunts, as well as mud crabs which usually turn up in better numbers during September.

Once again, the humble flathead has been the fish of the week in both the Baffle and Kolan systems.  It’s great to see so many photos coming into the Tackle World Flathead competition.  A few anglers are starting to explore the upper reaches of Baffle Creek.  Grunter, mangrove jack, trevally, queenfish and estuary cod are starting to fire up around the many rock bars in the Baffle.  Once again, September is a prime time to target a few mud crabs in both the Baffle and Kolan, so don’t forget to throw in a few pots when you head out this weekend.

Lake Cania is one of my personal favourite impoundments to fish at this time of the year, and with the school holidays coming up, it’s a great spot for family fishing and camping.  The Australia bass can be caught in schools as well as around the edges of the lake.  As the days warm up the mighty saratoga will become more active and they are a fantastic by-catch while chasing the bass.  Lake Cania is currently holding at 49% water capacity so there is still plenty of water to fish and explore.

Lake Monduran has really started to hit its straps during the past few weeks.  Most of the team from Tackle World Bundaberg had a cracking weekend chasing barra at the lake last weekend.  The amount of barra we are seeing on side-imaging is fantastic.  The water level at Monduran is currently at 55% and it’s great to see some weed growing around the edges once again.  Most anglers we talked to are managing to get at least a few hook-ups per session, but due to the size and condition of these fish, staying connected can be challenging.  I landed a couple of barra on the weekend using the good old Jackall Squirrel.  The Zerek 5” Flat Shad in the new absinthe black colour was also doing the damage.