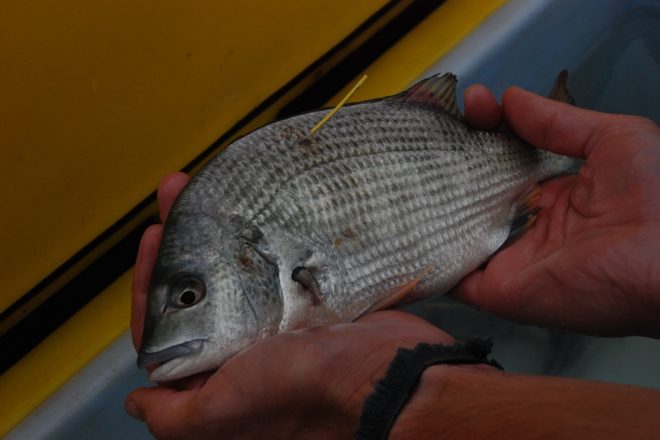 Based on its size, it’s possible that the re-captured bream was over 15 years old.

About a decade ago, scientists from DPI Fisheries were researching how recreational fish species were using the Lake Macquarie artificial reef.
This work involved implanting internal acoustic tags (as well as external T-bar tags) in 39 yellowfin bream (see indicative tagging images) caught in various areas around the lake and then using acoustic receivers to track their movements and behaviour.
Fast-forward to the present day, and angler Ken Peterson of the Teralba Lakesiders Fishing Club has recaptured one of these tagged bream. Ken found the small, battery-like transmitter when he cleaned the fish and got in touch with us to report it. Our records indicate the fish was 23cm long when it was tagged on 14 May 2012 on the southern side of the Wangi Peninsula.
By the time it was recaptured an amazing nine years and eight days later, it had grown to 36cm. Based on its size, it’s possible that the bream was over 15 years old. Before the transmitter expired, this particular fish had been most commonly tracked swimming along the shoreline on the south-western side of Wangi Point.
It was last detected heading south of Pulbar Island. Long-term tag recaptures are comparatively rare for species such as yellowfin bream, and the fact that this fish was recaptured about 7.5km from the location where it was originally tagged almost 10 years ago, demonstrates the site fidelity that this species can display. Maybe the great habitat in Lake Macquarie made it just too good to leave?
For more info on DPI’s research work, see: https://bit.ly/3fTB9ee