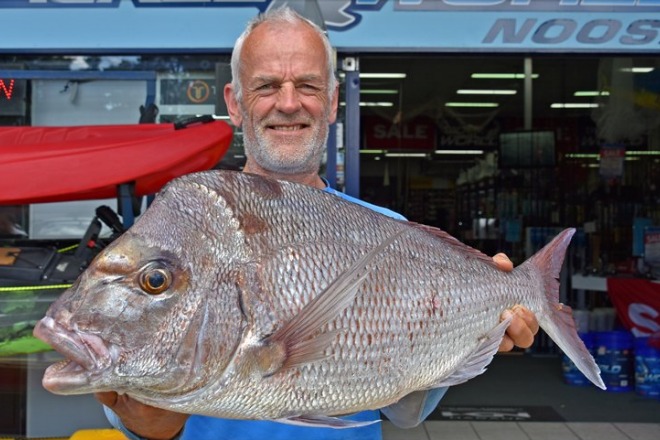 Top Trevally in the Noosa River

THE Noosa River has been on fire this week with some outstanding golden and giant trevally taken in the lower stretches of the river.

Surface presentations like the 50mm Fish Candy Baby Bells have been working well early morning and late afternoon. As the sun gets a little higher golden trevally have been taking well-presented micro jigs like the 7g IMA Ichimatsu jigs. The assist hooks on these need to be upgraded to deal with a powerful golden. Live beach worms fished on a light running sinker rig with a long fluorocarbon leader have accounted for some quality whiting along the Gympie Terrace stretch of the river the Dog Beach and the Frying Pan.

Quality flathead have been caught around the Woods Bays and river mouth areas. Ecogear Balt Soft plastics fished close to the bottom have claimed some quality lizards, drifting whole fish baits like frogmouth pilchards on a small set of gangs has also been a productive method for targeting some nice sized lizards. Mangrove jack have begun to make their presence known, live baits straight from the cast net that are fished hard up against structure has been key to tangling with a red devil. Mud crabs have started to show up in pots along the ski run and near the mouth of the first lake, fresh mullet is the prime baits, don’t forget to mark your pots as fisheries are red hot on unmarked pots.

Squire and snapper have been feeding on the close reefs like Sunshine Reef, Jew shoal and Halls Reef. Plastics like Berkley gulp 5” jerk shads or lightly weighted pilchards have been doing the trick. Burley is also key so if you can get a burley pot to the bottom this will greatly improve your chances, another important thing is to fish those low light periods, and this will greatly improve your chances of a bigger snapper. Pearlies, snapper, trag jew and cod have come from both Chardons and North Reefs. Bigger snapper have again been taken on lightly weighted pilchard baits or lightly weighted 7” plastics fished back through that berley trail. The reefs east of Double Island have been producing hussar, squire, snapper, amberjack, pearlies, trag jew and red emperor.

On the beaches; tailor are in good numbers along the eastern beaches and off the national park rocks. Pilchards on gang hooks or metal slugs have been working well. Up on Noosa’s North Shore bigger tailor have been feed around dawn and dusk, pilchard baits or large fresh flesh baits have claimed some quality fish. For family’s fish through the day, dart and whiting have come from the gutters along the local beaches. Live beach worms and small strip baits have encouraged some good bites.

In the freshwater; trolling the main basin of Lake McDonald has accounted for good numbers of bass and yellowbelly. Small profile hardbodies like the Ecogear SX60 have been doing the trick. Blades and tail spinners fished through the schools in the main basin has also been effective. Up at Lake Borumba Anglers have been having a ball on the bass. They are schooling up again in the main basin of the dam so a sounder is vital to find the fish. Blades, tail spinners, soft plastics and ice jigs have all been accounting for good fish.