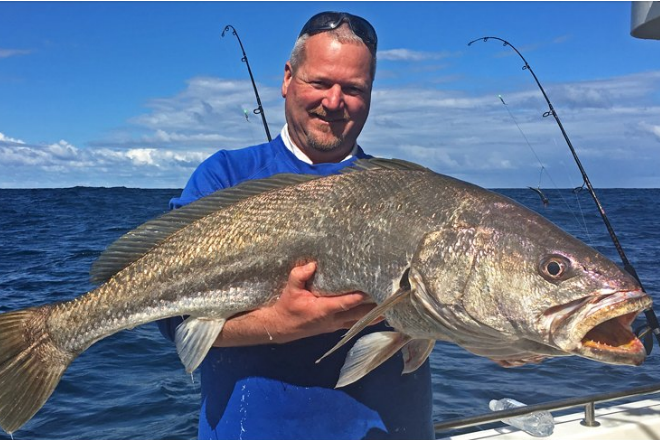 Trevally time in the Noosa River

IN the river; Trevally have been running rampant throughout the Noosa River with plenty of quality fish caught in the lower reaches.

The Woods Bays area has been the best place to fish for anglers wanting to target bigger fish. Over the past couple of weeks there have been good captures of golden trevally, cale cale, gt’s, tea leafs, and big eye trevally throughout the bays. Micro jigs have been one of the standout ways to connect to these hard fighting pelagics. For best results try and get out on the water for first light. Poppers are also a great way to hook trevally with the addition of being able to see a fish come up and take a lure off the surface.

River 2 Sea’s Baby Bell Poppers are a great lure to use for trevally and tailor as they can be thrown a far distance with ease. When working poppers try to mix up your retrieve with a small burst of pops without trying to create too much water displacement. There’s been some good action after dark with lure anglers hooking big eye trevally throughout the Back of the Sound. Soft vibes like the Fuze Pulse Vibes come in four different sizes ranging from size 7grams to 38grams and work on anything from trevally, jewfish, jacks, flathead, snapper and many more. We’ve also recently received an order of Storm Chug Bug surface poppers with all size and colours these lures have been the “go to” surface lure for many years in the Noosa River.

On the Beaches; there are still some good tailor getting caught on Noosa’s Northshore with the better quality fish caught out the front of the Teewah Camp Grounds. Spend the time and find the best quality water possible.
Offshore: It’s all about snapper! The middle reef belts have been producing outstanding captures of snapper with North Reef being the home of “big reds”. Soft plastics fished on a lightly weighted jigheads are the key to catching snapper. Try casting your soft plastic as far as you can up current and allow it to drift down to the bottom. Zman’s range of 5” size soft plastics are one of the most popular plastics used offshore for snapper. Banks has been red hot as well with plenty of amberjack being taken along with tusk fish, snapper, cod, cobia and others.