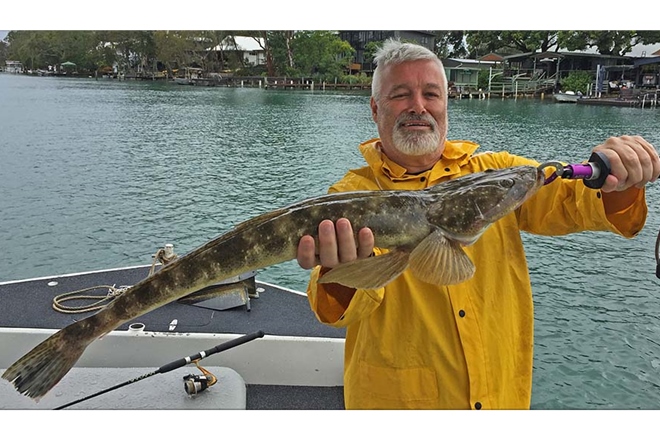 The Noosa River was a hive of activity as the temperature sored over the weekend, this intern raised water temperatures quite significantly. The other factor that changed things in the river was some good falls of rain in the catchment areas, there wasn’t a great deal of runoff but enough to colour up the water a little on the run out tide.

Fresh water tends to make the bait in the river more active and in turn really get those predatory fish eating. There have been some great jack taken over the last week with the night angler really getting some stonkers. Live baits, fresh mullet strips, and live prawns have been the go. Fishing structure or deeper holes has been where the red devils have been hiding while at night they do tend to venture out onto the flats and beat up smaller bait fish. Soft plastic like the Zman Swimmerz and the Keitech Easy Shiners have also claimed some nice fish.

Flathead are also in good numbers with some big mummers over the legal limit, landed and returned. Trevally have also been feeding well on live bait with the Tewantin ski Run a hot spot first thing in the morning. Surface lures have also worked well before the boat traffic with some of the larger surface lures like the Fish Candy Baby Bells and the Storm Chug Bugs claiming some bigger fish.

Whiting have been in great numbers with the Frying Pan and the Dog Beach being the pic of the spots. Worms and yabbies have been the prime baits with surface lures worked across the shallows on top of tide also working well.

On the offshore scene, some good mackerel have been taken on trolled lures around Halls Reef, Halco Laser Pros, Samaki Pacemakers and Nomad Minnows have all got the runs on the board. Floating baits has also been a popular way to do battle with some good sized pelagics, Sunshine Reef, North Reef and Jew Shoals have been the prime spots.

If you are going to anchor up make sure you get a good burly trail happening with the added bonus of cobia and dolphin fish coming from the trail. For those of you working the bottom, trout and big sweetlip have been on the menu from Sunshine Reef.

North reef has given up big sweetlip, mori cod, gold spot cod, squire snapper, and tuskies. Tuna schools have been at play in Laguna Bay rounding up schools of small bait fish, slugs like the Halco Twisty in the 20 and 30 gram size have pinned some good Mack tuna.  With the wind and swell little unpredictable trips to the outer reefs have been put on hold until things calm down.

The beaches have been packed as people make their way down for some relief from the summer heat. Most angler have been up early to beat the heat and afternoon breezes and have had some excellent results. Tailor continue to be taken on Noosa’s North Shore, with most good fish coming on the morning tides, for the anglers that like to fish at night the evening tide has also been good for tailor and small jew.

The close gutters have been great for whiting and dart as well as some good flathead. On the southern beaches Marcus and Peregian beaches have seen good catches of whiting from mid to high tide on live worm and pipis.

Now for all the  latest information, log onto www.fishingnoosa.com.au and for up-to-date bar and fishing reports, don’t forget to drop into Davo’s Tackle World in Noosa or Davo’s Northshore Bait & Tackle at Marcoola to find out where the fish are biting, and remember: Tight Lines and Bent Spines!