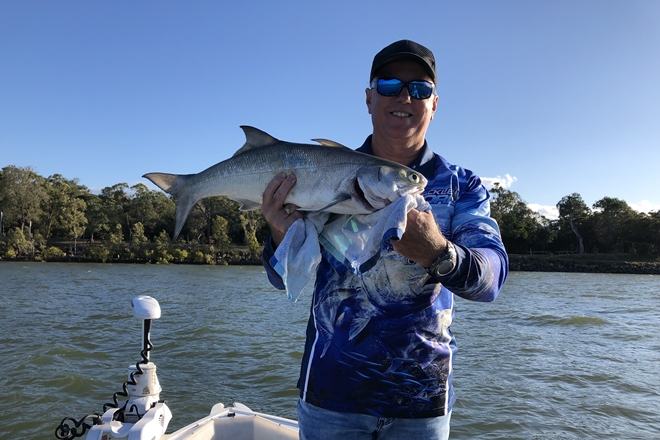 Shane Anderson with the 67cm blue salmon he caught in the Burnett River last weekend.

ISN’T it great that the daylight hours are starting to get longer and the temperatures are just starting to rise? This is always a magic time of the year to get out and explore what the Bundaberg region has to offer.

The anglers who were lucky enough to have some time off earlier in the week and venture offshore all reported catching a quality mixed bag of reef fish including coral trout, red emperor, tuskfish and sweetlip. It’s exciting to see so many anglers using jigs, soft plastics and the Tiger Baku Baku jigs from Shimano with excellent results.

Some good reports have come in from the Burnett during this past week. Plenty of impressive flathead have been caught, measured and submitted during the Tackle World Bundaberg flathead competition this month. Winter whiting have finally showed up off Burnett Heads and are fantastic fun to target with light gear when the weather permits. Bream, grunter and blue salmon have been other popular species keeping anglers entertained this week.

Both Baffle Creek and the Kolan River systems are really fishing well. The mouths have become home to some monster queenfish and trevally. Further up the systems the flathead have been responding well to both lures and fresh baits. A few mangrove jack are starting to become aggressive and will continue to improve as we get closer to summer. There has also been some nice mud crabs caught this past week.

Even though the water is crystal clear at the moment, the number of barramundi willing to smash your lures is improving. One technique that has been accounting for barra up to 95cm is casting 6-8” soft plastics over shallow flats in the late afternoon. Once again, the action should only improve over the coming months, hopefully with barra up to the magic metre mark becoming more common this summer. If you’re planning a trip to Lake Monduran, drop into Tackle World Bundaberg for an up-to-date report on this awesome fishery.

Check out the photo of young Hudson Schiffke, who is passionate about fishing. In conjunction with the Bundaberg Sports Fishing Club Inc, he’s been presented with a certificate from the Australian National Sportsfishing Association (ANSA). His certificate is for a “Sub Junior Australian Record for capturing a  370mm dart common”.  The dart was caught earlier this year at Coonarr Beach, however, the presentation was delayed due to Covid-19. Congratulations Hudson! He told his mum recently that when he’s 4, he’s going to catch bigger fish ‘cause he’ll be a big boy! What an awesome achievement, keep up the great work little legend! This is our future generation of fishos, so take a kid fishing and make their day!