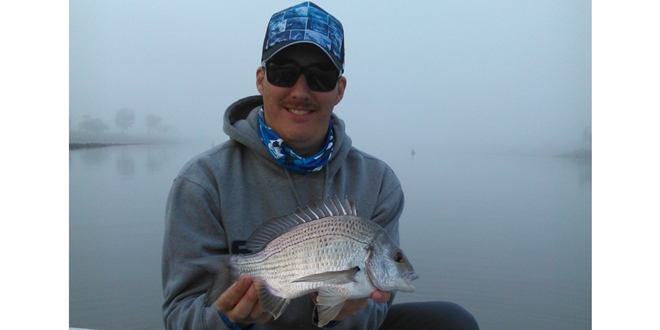 Cameron Bowman with the bream he caught off Kirby’s Wall recently.

At this stage the weather forecast for the Bundaberg area looks good for this weekend, with Sunday being the pick of the two days.

However before you go fishing, always check the forecast to keep up to date with what’s going on, as things can change.

There haven’t been many offshore reports due to the weather lately.

Good numbers of jewies and snapper are venturing in to the closer reefs off Bundaberg as the water temperature starts to cool down.

The numbers of spotty mackerel out the front should start to taper off, whereas the bigger spanish will become more active around the local reefs, with the Cochrane Artificial being worth a try for both pelagic and reef species.

The Burnett River is still one of the most reliable fisheries in the area.

I had the chance to flick a few soft plastics last Saturday morning, targeting the many rock walls in the Burnett.

For a few hours session we managed to land heaps of bream, estuary cod and flathead.

A couple of large whiting even had a crack at our lures.

The soft plastics that worked well were the 2.5” Grubz from Zman, the 3” and 4” Swimmming Mullet from Gulp and the Squidgey 80mm Wrigglers.

Using light gear and lightly weighted soft plastics is a fantastic method to go out and catch a feed.

On the freshwater scene, the Lake Monduran barra are starting to become a little sluggish with the fall in water temperature making them less aggressive to strike your lures.

But, if you can find sun-warmed bays in the afternoons with wind and current flow, this might concentrate the better numbers of barra.

On the plus side, Lake Gregory has been fishing very well for bass.

During the week there’s been good reports of epic surface sessions with bass up to 50cm smashing poppers cast to the edges.

Later in the day, targeting schooled bass in the deeper water on small blades, tail spinners and plastics has been producing the goods.