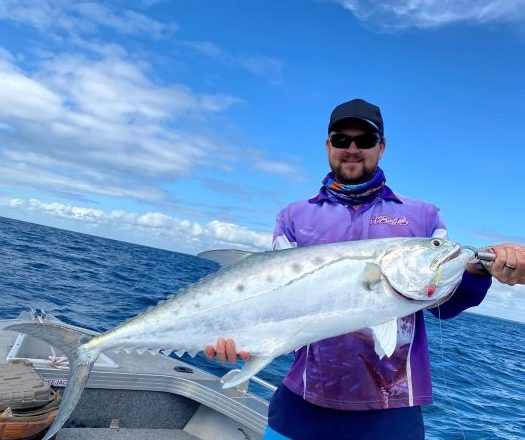 Brett Morgan with a cracker Queenfish that was caught recently.

The inshore reefs have been firing the past week! The numbers of 1m+ queenfish at the four mile and the artificial reef off Elliott Heads has been crazy! I found if they are hanging around the bottom, 20g Samaki Vibes were perfect to get the bite. If you see them up towards the surface, throwing Halco Rooster Poppers is as exciting as a hit can get. There’s also been plenty of school mackerel being caught. Fast retrieving flasher spoons and sinking lightly weighted pilchards will get you a good bag. Fingers crossed the weather will play the game. As always, check the forecast before heading out.

The Burnett has been fishing really well. The amount of flathead that’s been caught has been awesome. I’ve heard of a few anglers catching over ten in a session! Jigging Gulp soft plastics over sand bars and the edges of rock bars has been the go-to places. The prawns have also turned up. Most of the deeper holes throughout the river has been the best spots. The best time to target them is one hour each side of the low tide. Don’t forget to throw the crab pots in because there’s been plenty of nice muddy’s on the move!

These two systems produced some cracking sized mangrove jack last weekend! Most these fish are being caught over shallow rock bars with either paddle tail soft plastics or live baiting with poddy mullet. The whiting has also been in awesome numbers! With low tide early in the mornings, it’s a perfect time to pump yabbies at first light and fish that incoming tide. Nothing beats a fresh feed of whiting! Also, the crabs have been plentiful in both these systems too. With the smaller tides, I’d be crabbing more around the main channels this weekend.

Lake Monduran has still been producing the barra! The barra seem to be heading back up in the shallower water with the water temp dropping. Working the shallow timber edges will be well worth a go. Jackall Squirrels has again been a standout lure to use. That early morning bite has again been the standout bite time. Remember to fish the wind-blown points. It looks like it’ll be blowing SE for most of the weekend.