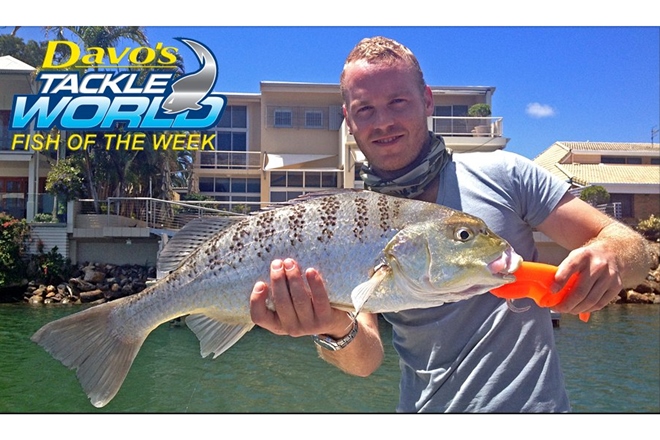 James Haas won the $50.00 Davo's Fish of the Week prize with this thumper javelin fish which he caught and released in Woods Bays. Photo: www.fishingnoosa.com.au

The Frying Pan has been loaded with whiting over the last week, worm’s yabbies and solider crabs have been the go too baits, for the lure angler that love working the surface the Bassday Sugapens in the 70mm and the Zip Bait skinny pops have been working particularly well. Mangrove jack are in big numbers at the moment, and the good news is, the hotter it gets, the better they bite! The stretch between Lake Cooroibah and Lake Cootharabah (locally known as “between the lakes”) is one such place that holds heaps of jacks and trolling deep diving lures like the 70mm Strada Dredge lure near the snags is a sure fire way to tangle with a few “red devils”. Live bait angler have also seen good success around the Tewantin Harbour and the Noosa Sound as these ambush predators love to come out of their homes and smash and lonely baitfish that floats past. On the Noosa Foreshore we are also seeing good quality whiting, bream and flathead, prawns are always a good go to bait when fishing with the family.

Heading Offshore, things greatly improved last week with a couple of cracker day to head out, with this a lot of angler did the run out to the Hards with some outstanding results including, sea bream, venus tusk fish, gold spot wrasse, Maori cod, moses perch rosy job fish and a good bag of snapper. Sunshine Reef has been loaded with some nice sized spotted mackerel taking high speed chrome slugs + trolled high speed lures like the Sakami Pacemaker, for the bottom bouncers there’s also been some nice sized snapper, sweetlip and coral trout in the area. Up on North Reef; there has been some cracking jewfish, pearl perch, cobia and snapper micro jigs around the 30 -40g have been very effective with live baits also getting their fair share.

On the beach, the Southern beaches are where most of the reports are coming from, with good jew coming from the rocks down towards Coolum, Noosa’s North Shore is starting to get busy as holiday maker head up there camping over the summer break. The beaches north of Teewah have been the most productive with dart, bream, whiting and flathead all in the closer gutters.

Now for all the latest information, log onto www.fishingnoosa.com.au for up to date bar and fishing reports and don’t forget to drop into Davo’s Tackle world Noosa or Davo’s Northshore Bait & Tackle at Marcoola to find out where the fish are biting, and remember Tight Lines and Bent Spines!