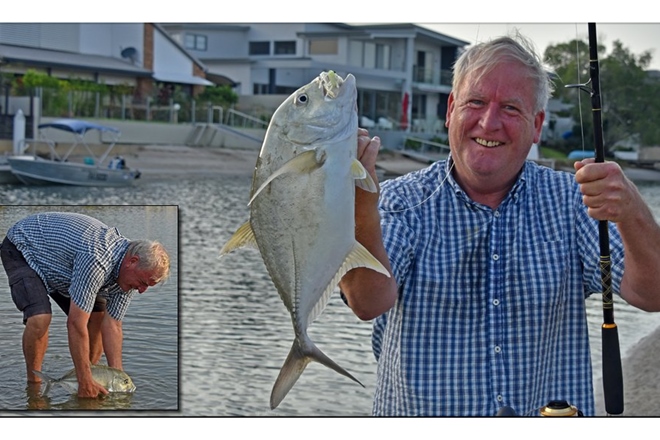 On Monday morning local angler Ian Harrison was loaded up with a decent fish near the Munna Point Bridge. It was about half an hour before low tide. Quite a few prawns were doing the 'run for your life' dance across the water. Ian was delighted with his catch, which engulfed a prawn plastic surface lure, as it was his first fish on his new Shimano 8000D reel, a birthday present from his son. How good is that! A couple of quick pics, a de-hook and back she went.

With the wind up over the last couple of weeks, the offshore scene has been a little quiet. For those who did make it outside, it has usually been a quick run to the closer reefs. Sunshine Reef, Jew Shoal and Halls Reef have all been popular with the early birds. Pelagics have been on the mind of most anglers with the onset of the warmer currents coming down from the north, most have seen some good activity, Mackerel be it spotted or spanish have been landed with the occasional spanish sneaking over the meter mark.

The odd Dolphin Fish have also been around with a couple of larger fish seen cruising the surface, long tail and Mack tuna are also in the mix and are harassing bait schools on the high tide. Floater type bait fishing has been the most successful, with trolled hardbodies also doing the job. If you come across a school of tuna feeding on a bait school slugs are your best bet. For the bottom bashers the trout are about with Sunshine Reef really firing. Bait fished hard to the bottom and Micro jigs like the Shimano Colt Sniper have done most of the damage. The wind is hopefully due to abate this weekend so we should see more report for the outer reefs.

In the river it has been all about the mangrove jacks, there have been some crackers caught over the last few weeks with fish over the 50cm mark very common. Live bait fished late into the evening has been the most successful, soft plastics and hard bodies have also been going well. Fishing the structure is always the key when fishing for jacks so areas like Tewantin harbour and Noosa Sound are favourite spots for local anglers. The Area between the lakes has also been well represented with some nice fish taken from the tree lined edges of the river. Downriver Gympie terrace has been popular with families taking advantage of the sun.

Whiting have been the mainstays with bream and trevally also in the mix, the good old prawns are always a popular bait, let face it everything eats a prawn. With the recent afternoon storms the mud crabs have been on the move running right throughout the river. Fresh mullet cut into chunks seems to be getting the most attention. The successful crabbing areas have been the Weyba Creek, and the upper reaches of the Noosa River. Remember crabs must be 15cm across the carapace to keep and the bag limit is 10 and you can only take the bucks.

On the beach the wind has also made things a little tough, so an early morning start is the key. As we move toward the full moon and with the lighter forecast winds we should see thing greatly improve on the beach. Make sure you look for those gutters and fish a couple of hours either side of the tide.

In the fresh water, Lake Macdonald is fishing well especially on the surface in the low light periods. Bass Bay and Three Ways has been the pic of the spots for those anglers casting plastics. Small spinnerbaits are still pinning good fish around the edges. On the freshwater Lake Macdonald near Cooroy continues to fish well at sun up particularly on the surface. Fish well over 40 centimetres are becoming very common once again. Bass Bay has delivered some good fish as well as Three Ways. Another good tactic is working small spinnerbaits around the weed edges. Saratoga continue to feed hard around Borumba Dam now the spawning season is over. Smaller hardbody suspending lures like the Eco gear CXC35 have been working well.