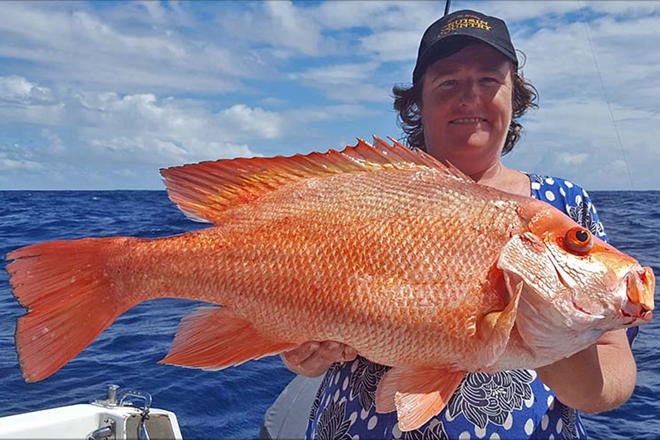 Julie Watson from Boreen Point with the standout fish from a recent trip offshore. Photo: www.fishingnoosa.com.au

With light winds, anglers headed out from Noosa

With some bigger swells last weekend, crossing the Noosa Bar was not for the faint hearted, with a bit of good timing angler were able to get out between the larger sets. There were plenty of birds working in the bay with Mack tuna and long tails feeding on the bait for underneath. Some quality fish in good numbers were boated using a range of River2sea jigs, Spanyid Raiders in 10-20g and Jackson and Zerek stick baits.  For those that chose to say close, Sunshine Reef was the spot for pearl perch, grass sweetlip, venus tuskfish, quality maori cod and some good mackerel. Chardon’s Reef saw mahi mahi, squire, moses perch on both live and dead baits that were trolled and free floating. For those that did head out a little further North Reef also produced quality sweetlip, mackeral, jew and cod. For the bigger craft that did the run out to the hard and the banks; Quality Mahi Mahi, Squire, Venus tusk fish and some good catches of Moses perch were reported. Double Island Reefs also saw squire, moses perch, coral bream, mahi mahi and scarlet sea perch. Micro jigging is really taking off with angler getting some outstanding results. If you have not taken a look at micro jigging do yourself a favour and check out some of the amazing rod and reel as well as the great jigs that are available.

In the Noosa River; whiting have been in great numbers, Weyba Creek, Gympie Terrace and the frying pan have all produced fish. Lures like the Strada, Atomic and River2Sea surface poppers have caught some of the larger fish, along with live worms and peeled prawns being the best baits. Mangrove Jacks have been taken at night at the mouth along the rock walls on free floated baits like pillies and live baits. The Frying Pan is fishing well for legal sized bream and flathead on pillies and a range of Rapala, DUO and Strada surface lures. There have been plenty of Trevally in the river with some good bigeye, GT, and diamonds coming from around Woods Bays. Surface popping has been great fun with the fish actively feeding in the low light periods.   Better numbers of Mud crabs have started to show after the recent downfalls around the area, best baits have been whole pilchards and fresh mullet. Don’t forget the legal size is 150mm across the carapace, you can only take the males, with a bag limit of 10.

On the Beaches; Whiting are still in good numbers along Sunshine Beach, Marcus and Noosa Northshore, freshly pulled sand worms and pippies are the best baits with the start of the run out tide seeming to fish the best. Dart are also prolific and can be a bit of a pain if you are chasing the whiting, there have been some larger dart at first light, small pilchards, white bait and hardy heads have all claimed good fish. A few schooled jewfish still being caught off the rocks on Noosa Headland, along with snapper and larger tailor, baits have been whole pilchards, squid and slabs of fresh mullet fillets. Larger giant trevally are being caught off the rocks on large surface popper and GT ice-creams. Heaver braided lines and a big cast is the key.

In the fresh water; Lake McDonald has fish well early morning. Fishing weeded edges out to 30-35ft of water with Spinnerbaits, eco gear ZX40’s and Jackall Tn50’s in brown dog colour. Saratoga have been hitting surface early in the morning and late afternoons along the weeded banks, Lucky Craft and Megabass surface lures have been the go. In Borumba; large schools of small bass have been reported to be active in the late afternoons in 30ft of water, blood worms and shrimp have been the best baits, along with 2.5-3” soft plastics in paddle tails slowly worked up from the bottom have proven to be the best all throughout the day, while surface poppers have worked extremely well in the late evenings.

Now for all the  latest information log onto www.fishingnoosa.com.au for up to date bar and fishing reports, don’t forget to drop into Davo’s Tackle World in Noosa or Davo’s Northshore Bait & Tackle at Marcoola to find out where the fish are biting, and remember: Tight Lines and Bent Spines!