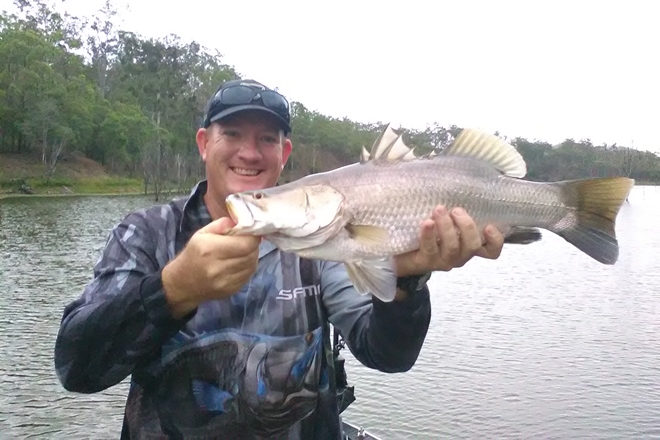 Dale Smith with the barra he caught at Lake Monduran last weekend.

The forecast for the Bundaberg area this weekend is not looking too bad, with light to moderate easterly wind predicted.

The ever-reliable Burnett River has been producing some really nice fish, with some monster mangrove jack, summer whiting, big grunter and the odd jewfish and threadfin salmon all testing anglers’ skills. There have been good reports of big banana prawns in all the usual haunts, and some impressive mud crabs have also been caught in the Burnett during the past week.

The Kolan has also been worth a crack with a heap of mangrove jack caught around the many rock bars in this system.  Casting soft plastics between 3” and 4” as close as possible to the structure and worked back slowly has been doing well, but floating live baits such as sprat, poddy mullet or live prawns has almost guaranteed a bite from these awesome sports fish.

The Kolan has also been producing some nice flathead, grunter and summer whiting around its many sand bars. Schools of mainly smaller queenfish and trevally have been present in most systems lately and can be tremendous fun targeting them with poppers on the surface and metal slugs.

The Elliott River is always popular with the kids fishing from the sand at the mouth.  Some monster flathead and heaps of whiting and bream have been keeping the young ones amused for hours.

It won’t be long before Lake Monduran becomes the number one barra impoundment in Queensland once again.  The amount of barra caught last weekend, even in the wind and rain was impressive.  A lot of the active barra have been between 50cm and 60cm, but there are plenty of bigger barra inhabiting the same areas.  February, March and April are my favourite months to fish the dam, so let’s hope the barra fishing gets even better over the coming months.

Barra season opens again at midday on the 1st of February for all the systems around Bundaberg, so make sure your gear is ready to target these fish.