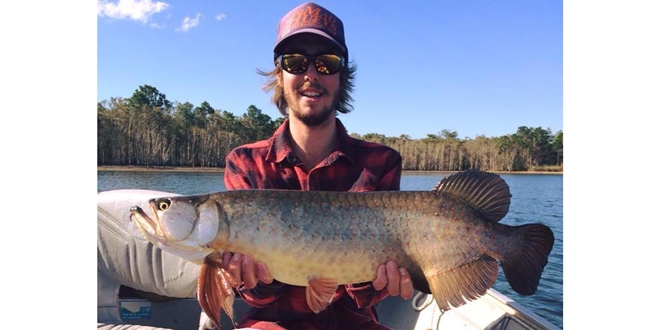 Hayden Kirchner with the saratoga he caught at Lake Gregory recently.

Well another Garage Sale has come and gone for this year, and on behalf of all the Tackle World Bundaberg team members, I’d like to thank all who attended last weekend. Hope you enjoyed a free sausage and took home a few bargains as well.

For this weekend, keep an eye on the forecast for the Bundaberg area. At this stage, light east north-east winds under 15 knots are predicted, so it looks like a great chance to get out on the water and enjoy what the weekend has to offer.

By all reports the guys who head offshore reef fishing are starting to catch some really nice snapper, parrot and sweetlip, but most of the action have been in our local rivers and creeks with the Burnett still the pick to land some quality fish. I’ve heard of some massive grunter back in the river. Anglers using soft plastics or fresh baits have been doing the damage, with live sprat and mullet cut into strips being the two stand-outs.

The salmon have slowed a little, but the amount of big flathead being landed is just amazing with lots over the legal limit of 75cm.

This year’s bream season has been another cracker. A lot of bream over 35cm are still being caught around most of the rock walls in the Burnett.

As the days start to warm up, the first hint of the northerly winds that we seem to get at this time of the year should fire up both Lake Monduran and Lake Gregory.

Last weekend a nice saratoga was caught at Lake Gregory in the middle of a hot bass bite casting lures around the weed edges. So let’s hope the mature saratoga in the dam breed this summer and take this already awesome little dam to the next level.

Lake Monduran also shouldn’t be far away from seeing good numbers of barra caught again. The barra that are being caught in the dam at the moment are averaging between 90cm and 100cm. Let’s hope this only improves so a lot of barra will be hooked at this year’s Monduran Family Fishing competition held in October.