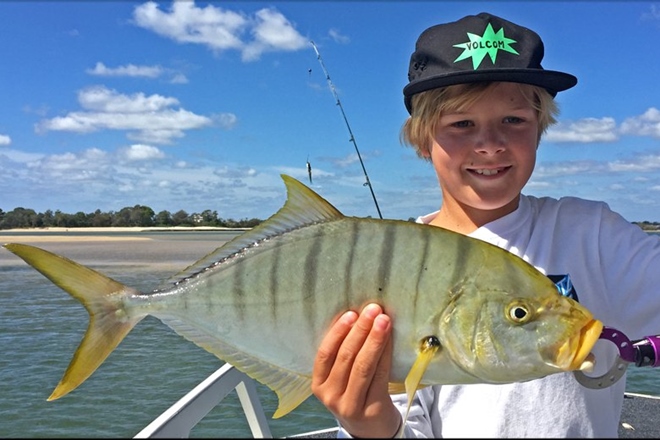 Noosa River has plenty to offer

It is all about the flathead in the Noosa River; quality fish have be caught in the lower stretches of the estuary. Whole fish baits like whitebait, hardy heads and frogmouth pilchards have been the best dead bait offerings. For those of you that love chasing them on lures, soft plastics like the Chasebaits 4” paddle baits from River2sea have produced some bigger flathead. There have been plenty of quality whiting caught around Weyba creek, Munna Point, the Frying Pan and Gympie Terrace areas. Live worm baits have been securing the better fish. The windy conditions have been perfect for chasing whiting with surface lures. The Strada Viral in the 70mm size has been one of the most successful. Some good sized tailor are still around in the lower stretches of the river. Live baits and fresh flesh baits have been the best option to target these fish.  The night owls have seen some good mangrove jack caught. Paddle tail plastics and prawn imitation soft plastics have been accounting for some good fish when fished around heavy structure. With a bit of fresh in the river the mud crabs are starting to walk, some good bucks have been caught in pots loaded with fresh mullet.

On the beach; live worm baits have been accounting for some good whiting from the gutters along the eastern beaches and the North Shore. Those same gutters have been producing good sized tailor at dusk and dawn. Dart and bream are in good numbers on the high tides. For those of you that struggle to tie those rigs, the instinct whiting prowler readymade rig is a simple way to catch some of these great fish and gets the kids involved easily.

On the offshore grounds; the reefs off Double Island Point have seen captures of red emperor, amberjack, snapper, grassy sweetlip, jew and moses perch. Some large cobia have been caught on North and Chardons reefs. Fishing with live baits like yakkas and slimies on a floater rig has seen the best results on these fish. Sunshine reef has producing sweetlip, moses perch and trout. Fishing hard to the reef with a size 10 ball sinker right down to the hook has been very successful. Mackerel are also really starting to come on line with good schools of spotted mackerel rounding up bait. Keep a close eye out for that tell tail bird activity.

The freshwater has been really firing, Soft plastics fished close around the weed edges in Lake McDonald has been producing some good bass. Trolling lures like the Ecogear SX60 around the main basin is also a good method to catch some bass and yellowbelly at this time of year. In Lake Borumba; bait fisherman using live shrimps fished around the timber have been catching bass and yellowbelly. Spinnerbaits and plastics fished around the same area have also pinned some good sized fish.

Now for all the  latest information log onto www.fishingnoosa.com.au for up to date bar and fishing reports, don’t forget to drop into Davo’s Tackle World in Noosa or Davo’s Northshore Bait & Tackle at Marcoola to find out where the fish are biting, and remember: