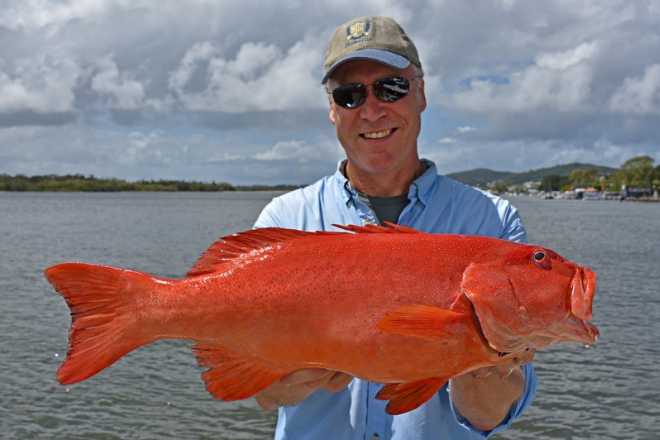 Chris Wybrow from Clovelly in Sydney picked up this quality coral trout on a pilchard and squid bait combo on a paternoster rig. He was on Thursday's Trekka 2 charter to Sunshine Reef. Photo: fishingnoosa.com.au

There were a few opportunities to get off shore last week with Saturday being one of them. A lot of boats headed out with most boat-ramp carparks full to overflowing.

Laguna Bay has been producing good numbers of spotted mackerel as well as mixed species of tuna during the day, small metal slugs like the 10 to 40 gram Arma slugs have working well. A high speed retrieve is needed as they like fast moving objects.

Halls Reef and Jew Shoal has seen anglers landing a nice bag of reef fish including cod, sweetlip, snapper and tusk fish. Pilchards and live yakka’s were the best baits to be using.

Sunshine Reef has been firing with trout lately, anglers reporting “it’s one of the best trout bites in a long time”. Live baits are the prime bait rigged on one of Chicko’s Trout Rigs which are sold instore at Davo’s Tackle World.

Sunshine Reef has also been producing quality numbers of spanish mackerel and Yellow Fin Tuna by fast burning metal jigs ranging from 40-90 grams off the bottom through the schools, this method has seen some outstanding results. Chardons Reef produced wahoo up to 10kg, spanish mackerel and mixed species of tuna.


Trolling hardbodies like the Samaki Pacemakers and trolling squid skirts has seen success. North Reef has been firing with a good mix of reef species as well pelagics that have all been feeding hard.

In the Noosa River, bream and whiting have been on the chew in big numbers around the River Mouth, Dog Beach and Frying Pan areas.  Live baits like live worms and yabbies have been the outstanding baits of choice. Using a basic running sinker rig with a size 4 bloodworm longshank hook, size 2 ball sinker and 6lb fluorocarbon leader has been the way to go.

With the influx of the dirty water after the rains last week, baitfish are hanging around the lower reaches of the river, this has seen anglers landing some quality sized flathead up to 85cm on baits like fresh mullet, pilchards and prawns. Soft plastics like the Fuze Seducer Mullet and the Atomic Prongs have also been getting the job done. Woods Bays has been fishing well for trevally and tailor around dawn and dusk, trolling hardbodies like the Jackson Athletes and the Ecogear SX60’s.

Fishing live baits at night saw anglers land some nice mangrove jack around the back of the sound fishing the run out tide. The Tewantin Ski run has seen some nice sized school jew.

Bream, whiting, dart and flathead have been caught along Noosa Northshore and Teewah Beach. Fishing the deep clean gutters using fresh pippies, live worms and frozen peeled prawns has seen some great results. Fishing up toward Double Island  has seen squire, tarwhine and tailor caught during the low light hours of the morning and afternoon using pilchards on a set of ganged hooks.