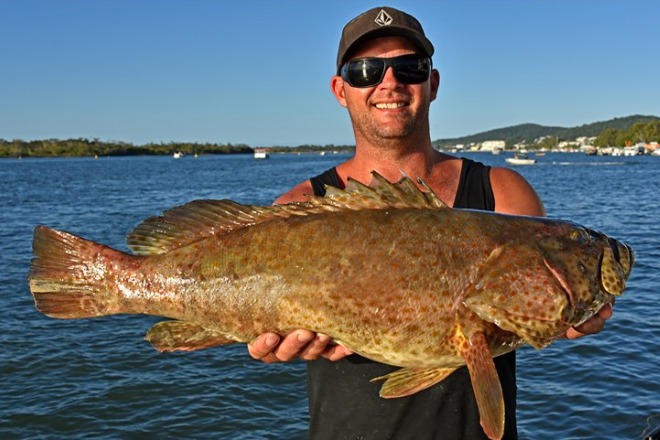 Plenty of Fish in the Noosa River

The Noosa River has been a hype of activity over the past couple of weeks, with Easter then the school holiday break attracting a lot of people to Noosa’s Iconic River.

Good quality flathead have been coming from the mouth of Lake Cooroibah, flathead have been pretty much right throughout the system. Try trolling a hardbody slowly or cast and retrieve soft plastics like the Fuze Prawn Head. Another species of fish that’s becoming more prevalent at this time of the year is the trevally, these great sports fish are very active early in the morning and late in the afternoon and are often seen busting up on prawns and bait fish around the Tewantin Ski Run, Woods Bays and the Noosa Sound. When they’re feeding like this, throwing surface lures at them should get a good response, so make sure you’ve got a rod rigged up and ready to go!

Good sized tailor are coming from the river mouth on dusk. Pilchards being the go to bait for these fish. Grunter bream have also been throughout the system with fresh mullet flesh a great bait. There have been plenty of whiting being caught in the lower stretches of the river. Area like the Dog Beach, Frying Pan and Gympie terrace stretch fished with live worms and yabbies has been the best method.

On the offshore scene, mackerel are still thick as thieves around the wider reefs like Chardon’s and North Reef. Now the weather is starting to cool, the reef fishing has improve dramatically as snapper and sweetlip numbers are set to increase. Places like Sunshine Reef have been holding good numbers of these fish already, so with this cooler weather expect the fishing to become even better! Good numbers of coral trout have been taken on Sunshine Reef. Live baits fished hard on the bottom is by far the best method. Getting them up before the sharks get hold of them is also a great challenge. Yellowfin, long tail and mac tuna schools are in big numbers and have been throughout the bay and on North Reef. Plenty of fun to be had with them on small slugs like the River2sea Sea Rocks slugs with the 14gr size working well.

The reefs offshore from Double Island Point have been fishing well for cod, squire, pearl perch and dolphin fish.

The southern beaches have again been fishing well, Sunshine Beach and Castaway Beach have fished well for whiting, bream, and dart with live worms doing the job. Jew have also been on the menu at night time on larger baits like mullet and tailor fillet. Whiting, dart, tailor and flathead have come from the gutters along the Noosa Northshore. Live worms are the best bait for the whiting and bream. Flathead and tailor are worth targeting using frogmouth pilchards.

If you’re chasing a bit more info about fishing the Noosa Region, why not jump online and visit www.fishingnoosa.com.au where you’ll find plenty of fishing reports, photos and tips, don’t forget to drop into Davo’s Tackle World in Noosa or Davo’s Northshore Bait & Tackle at Marcoola to find out where the fish are biting, and remember Tight Lines and Bent Spines!

Previous Top 5 Things to do at Lake Somerset
Next Mangrove Jack, Mackerel, Flathead around Bundaberg