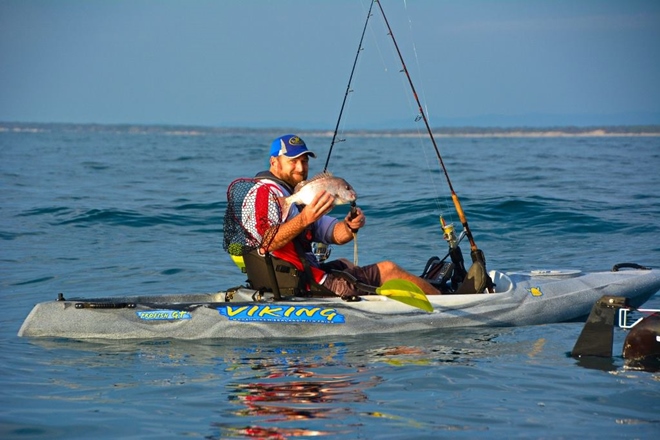 The first fish for the day was hooked when the author's unweighted pilchard was smashed by this pan-sized squire.

Putting Viking Kayaks Through Their Paces

EVER since I had first heard about the new Viking Kayaks models being released, I had been fairly keen to get out on the water to see how they fared.

Considering it was a Viking Profish 45 that I popped my proverbial kayak fishing cherry on a number of years ago, I was eager to see how Viking had further enhanced the Profish range, and the new Tackle Pod system was of particular interest. My first real chance to check out the new range in person came at this year’s Rainbow Beach Family Fishing Classic when our tackle stall was conveniently positioned next to the Viking Kayaks stand during the Twilight Fishing Expo.

The next two days provided me with the perfect opportunity to look over the Viking display, which featured the Reload, Profish 400 Lite and the latest release Profish GT, a smaller and more compact model with essentially the same features of the Reload. All three kayaks were fully blinged up with all the options. This fuelled my desire even further to get out on the water and see how they handled.

As luck would have it, only a few weeks later an opportunity arose and I landed a job working at Viking’s direct factory outlet on the Sunshine Coast. Shortly after I started the new job we had a demo day on the water in the Maroochy River, which presented my first chance to see how well the kayaks paddled and to test their stability. I was taken aback by how easy it was to stand up with the flat floor and even paddle along while standing. All three kayaks performed well but the biggest test would be how they handled offshore.

With the big boss, Grant, over from New Zealand, we made a plan to hit the water early one morning before work for a bit of ‘product testing’. I spent the day before the trip setting up a new Tackle Pod complete with a Lowrance Elite-5 CHIRP sounder and a couple of Railblaza rod holders. Over a beer or two that night I spent a few hours searching online for GPS marks close to Caloundra and putting their co-ordinates into the GPS in preparation for our trip.

Arriving at the Kings Beach boat ramp just after 5am and beginning to rig up the kayaks, we couldn’t have picked a better day. Grant opted for the Reload and Jason jumped in the Profish 400 Lite, which left me the GT. We pushed off just before sunrise with our first point of call being Brays Rock.

The DownScan imaging feature on the Elite-5 worked a treat, making it easy to pick the schools of fish beneath the kayak, though the reefy bottom made using any sort of weight impossible while drifting. Instead we used unweighted pilchards rigged on a set of 4/0 Tru Turn gangs. We had been on the water for about an hour before I saw any action. Tap, tap, tap; I could feel a few small touches but it didn’t seem to be anything decent and I almost pulled up and moved on, when bang, my rod loaded up and it was fish on. Jason paddled over frantically, hoping to capture some of the footage on the GoPro, but in only 10m of water I quickly had the fish alongside the kayak and in the net before he could get the camera rolling.

A decent size squire was a nice way to start the day I thought as I paddled over to Grant in the Reload to throw the fish in his Chill Pod before dropping another bait. As this was Grant’s first opportunity to fish offshore since buying the Australian chapter of Viking late last year, he was fairly keen to catch fish that he couldn’t get back home in NZ. We continued to move around, picking up another couple of squire before I finally managed to land a grassy sweetlip to join the squire in the Chill Pod and offer something different for Grant to try.

With rumours of a few cobia lurking around the channel marker, we decided to push out a little further to try our luck. As we paddled out, container ships passed by, which meant a great test for the stability of the GT. The GT handled the metre-high wake with ease. We paddled around before finally coming across a good show on the sounder. No sooner had my bait hit bottom than I felt the rod start to load up and line began peeling off the reel. This time Jason was nearby and he quickly started filming and positioned himself in the best position to capture the fight.

When I eventually had the fish at the surface I realised it was a spotty mackerel and I debated how to get it on board with no gaff or lip grips and only a small landing net. Fortunately it made a run straight for Jason’s kayak and he was able to tail it and bring it on board.

By now we had been on the water for about five and a half hours and my bladder felt like it was about to explode following the jumbo coffee I grabbed from 7-Eleven on my way to the boat ramp along with the litre of water I had downed since departing. Looking back towards shore and knowing the distance I would have to paddle to get back in order to relieve myself, there was only one option that came to mind. Yep, I had to pee down the scupper holes near my feet. Sounds easy enough right? Wrong! Have you ever tried to pee while sitting down with your legs out in front of you? It’s not as easy as it sounds, believe me. Try as I might I just couldn’t manage to get the flood gates open.

Now as I have stated, these kayaks are really quite stable and you can stand up with ease, but that is in smooth conditions, not when you have to contend with a rolling swell. Standing up at this time was not an option unless I was prepared to lose my gear overboard in the process. I again looked back at the shore and the distance between me and the glorious nirvana that it would be to relieve myself. So I started the long slog back to the ramp, with each paddle stroke putting more and more pressure on my poor bladder.

Halfway in, we noticed a flock of birds working a school of baitfish coming towards us. Decision time – in another 10 minutes I could be back on shore and finally able to relieve myself, but instead I decided to turn and chase down the school of baitfish, hoping something bigger was lurking below. Like a man possessed I paddled towards the school, which took me further and further away from the ramp. However it was to no avail, because each time I got just within casting distance of the school it pushed out of reach again. Disheartened and now in even more discomfort, I once again started making my way back to shore.

The relief I felt was unreal as I climbed out of the kayak and rapidly made my way to the nearest place I could release the pressure on my bladder. As we packed up and loaded the kayaks back into the van, I couldn’t help but think how much I wanted to get back out on the water and keep going. All in all I had a fantastic day with great company. I am now looking forward to my next trip offshore on a Viking kayak, with plans under way for a trip off Rainbow Beach in hopefully the not-so-distant future. Until next time, stay safe on the water…