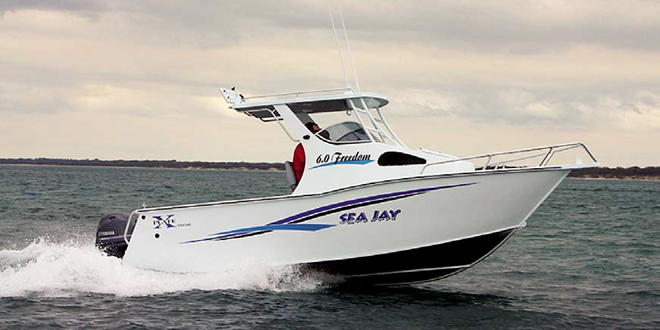 ALTHOUGH my original plan was to head to Bundaberg for a weekend of fishing and also to water test the new Sea Jay 6.0 Freedom Plate Xtreme, a BNB deadline meant only the test was possible. Arriving at the factory in the morning, I was met by Col and Troy Glass who showed me the test boat, which at first glance looked very impressive on the trailer. And while some finishing touches to cleaning were done, Col gave me a tour of the Sea Jay factory. It has grown over the years and the team has developed a very streamlined production process. Coupled with a bit of ingenuity in relation to the modification of machinery for cutting and pressing the materials, here is a manufacturing plant that delivers a quality product every time.

However I won’t go into too much detail about the specifics, as this is something that the team has worked hard to refine. But the end result ensures the process is very simple and effective, enabling boats to be delivered on time with all the different options required. On arrival at the ramp we were met with a very stiff 25-30 knot southeaster. Not ideal conditions for a day on the water but great to put this offshore rig through some serious stuff.

After launching in the marina and heading down the river a short way, we were soon out of the protection of land where the full force of the wind could be felt and seen through the endless series of white water waves rolling in. Although not a traditional bar, the water was still sitting up a little and had a similar resemblance to the nasty chop we experience here in Moreton Bay. This was going to be a good test.

As I punched down the throttles of the twin 70hp Yamaha 4-strokes, the boat jumped onto the plane and the torque of the twins could be felt as it settled on the plane. As with any boat it takes a little bit of time to see how it performs and what it likes and more importantly what it doesn’t, and the conditions were going to highlight these features. Settling at a good cruising speed on the plane, the 6.0 Freedom skipped across the waves. There was the occasional bang as we hit the odd bigger wave but for a plate boat it was relatively quiet, and conditions were ordinary.

As part of the familiarisation and testing I wanted to see how it performed with a bit more speed on. Well, you guessed it, the Freedom liked it. With a few more revs it sat a little higher in the water and levelled off, enabling the sharp entry of the hull to cut through the waves even better. Next on the testing block was a series of turns and running with, down and across the waves to see how the boat handled the conditions.

Generally you would try to run directly with or into the waves as you typically get a better ride, but this isn’t always possible. So it is important that a boat can handle whatever is thrown at it. Obviously you need to be aware of your situation and drive accordingly, so speed and trim are crucial elements to get right. And while we did rock and roll with the waves as I headed down on a 45-degree angle, I felt totally safe and in control.

There was a good metre of chop and the waves were close together with plenty of white water on top, but the 6.0 Freedom handled it well. Heading directly with the waves, we were about to put a bit more speed on and a quick flick of the trim button saw us easily running with the waves. So after putting the Freedom through its paces, it was time to head to more sheltered waters for a few speed trials. As we motored back it was a good time to take note of a few stand-out features. First is the fishing room.

This boat has been built to fish from and it has a decent amount of room at the stern. The Freedom models, which range in size from 6m to 7.6m, are centre cab construction, which in my opinion gives you the best of both worlds. By this I mean you get enough space at the helm to have two or three people positioned, as well as plenty of room on the dash for electronics, plus you have a cab with a hard top to protect you from the elements. The other benefit is that you can walk or even fish right around the boat, with its dedicated walkway. Obviously conditions would need to be good to fish off the side, but it does enable you to chase fish that might be making a beeline to the anchor rope. The bow would also be a good vantage point for casting slugs at pelagics such as spotty mackerel.

Looking at the list of standard inclusions, a lot of thought has obviously been given to having this boat ready to hit the water straight out of the factory. Included is an ally bait board, plumbed bait tank, heavy-duty boarding ladder, bunk cushions, carpeted floor, access door, rocket launcher with eight rod holders, six ally rod holders in the wide side deck, and the list goes on. One option I would get is trim tabs, which I think you need with a hard top.

On the performance of the twin 70hp Yamaha motors, I have tested a couple of rigs with this power plant setup and they universally provide an economical yet punchy option. As for the Sea Jay 6.0 Freedom, you just have to look at the peak numbers which come in with a respectable 1.72km per litre (almost a nautical mile per litre at 4500rpm which for a boat this size is very good). This is especially so when you match that to the 240 litre underfloor tank and this helps deliver a well-balanced package that is built for extended fishing trips. Now I’m sure you are wondering if it planed with one motor. However after speaking with Glen Gibson from Yamaha and seriously considering the subject, I now have a completely different line of thinking. The following will explain and illustrate why the question of planing on one engine is irrelevant.


There are a number of different reasons people choose to put twin engines on their rig and one is the added safety factor. However this doesn’t mean being able to plane, it means being able to hold or make headway against tide or wind and safely make your way to shore. This line of thought is quite different to what has been reported previously by many fishing and boating journalists. But, when you think about it, you want your boat set up so it is performing at its best all the time, and this is when the two engines are running.

With today’s technology and the proven reliability of outboard motors, it is rare you will have any problems and if you do you still have the other motor, which then becomes more like an auxiliary. However if you are a long way out to sea and one engine does fail, there is a simple solution to enable you to get your boat to plane on one engine and that is to carry a spare prop. So instead of running your engine flat out where it can’t rev out and will eventually damage your engine, you simply take out a split ring, undo a nut and replace the prop.

This boat on a single engine with a 14×11 inch prop will plane and rev out. In fact it does around 35km/h at full revs. And it is because the engine can rev and work how it is meant to that you won’t damage it.

So to answer that question, yes the engines can be set up so they plane on one motor but for ultimate performance an alloy 13.5 x 15-inch prop is the best choice. The Sea Jay 6.0 Freedom also has some other good quality features when you start looking at its construction. With bottom sheets and transom both constructed from 5mm plate and the side 4mm, you get the basis of a serious and sturdy offshore rig. In addition a strong 4mm keel finishes off the base.

Like all Plate Xtreme models, the Freedom features solid internal bulkheads, stringers and a reverse chine hull. With a length of 6m as the name suggests and a maximum horsepower rating of 150hp, you end up with a complete package, including trailer, of just less than two tonnes. This makes it a good boat for long offshore trips or a manageable vessel for beach launch and towing.

For more information on the Freedom or other Plate Xtreme boats from Sea Jay, check out www.seajayboats.com.au or give the factory a call on 07 4152 2111. Note: No camera boat was available on the test day for running shots. The photos shown in this article supplied by Sea Jay were taken on a different day. 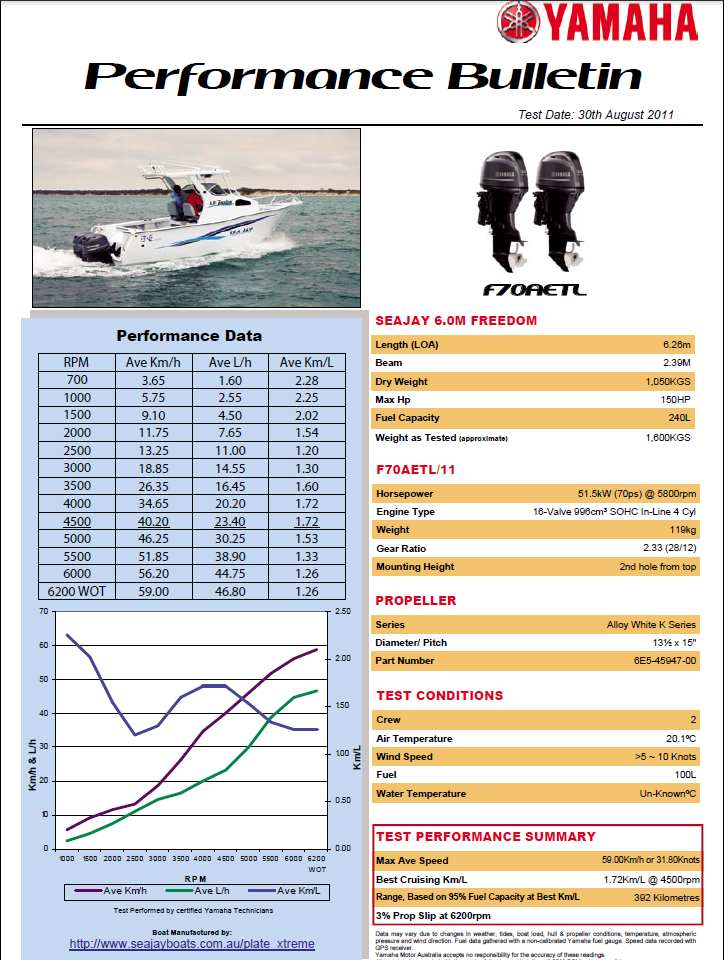