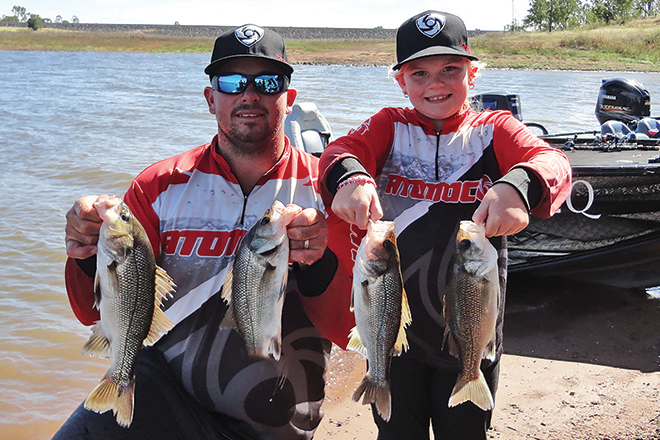 Winning senior angler Terry Allwood with his daughter Layla who placed second in the junior section.

MAY 13 and 14 saw anglers travel to Bjelke-Petersen Dam near Murgon in the South Burnett to fish the third-round qualifier of the Basstasstic tournament series.

Anglers who pre-fished BP Dam on the Friday before the tournament reported it would be a tough fish.
Saturday saw a good line-up of anglers take to the water to battle the weekend out for a place on Sunday’s final place board. Session one on BP Dam was tough for some, with only 12 anglers measuring in two out of two possible bass and two of these anglers were juniors.

Jordon Renz from Bundaberg had the most points on the board with two good bass totalling 846 points. Junior David Nowland from Monto picked up two bass for a morning total of 623 points. The weather was turning overcast and a little rain could be seen in the distance, so it was still anyone’s day to blow the score board totals out of the water.

The second session on day one saw Jordon remain in front. David continued sitting in number-one spot as well and it really was a case of fending off competitors and hanging on to the lead going into the final session on day two.

Day two dawned overcast, cool and windy. This weather meant things weren’t going to be pretty for anglers looking for big bass in BP Dam. In the end, the score board in the senior section saw a shift, with local angler Terry Allwood pushing into number-one spot with a final tally of 2265 points, which earned him $600 cash.

Another local, Matt Mott, took out second place with 2198 points and went home $400 better off. Jordon had to settle for third place with a total score of 2175, though $300 was a decent consolation. The Evakool Big Bass prize and cash pool of $350 was won by Shane Howard from Kingaroy after he landed a 449mm to the fork fish.

Cindy Schloss from Dalby won the female angler prize and took home a pair of lip grips and tackle. The ‘no fish’ Shimano reel prize went to Trevor Stead from Kingaroy. In the junior section, it was a happy story for David who ended up taking the win with a total score of 1923 points.

His score put him eighth overall and he won a lure pack donated by Bill and Cindy Schloss, so well done David. His next rival was a local and newcomer to tournament fishing, Layla Allwood from Murgon, who finished with 1603 points and a $50 Sludgies Lures voucher. 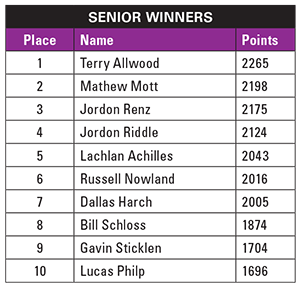