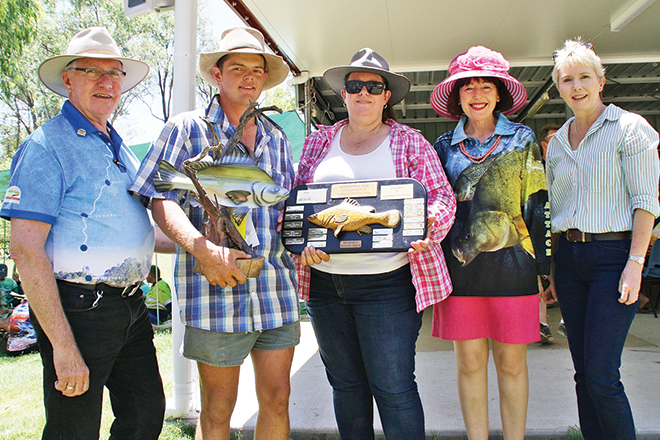 BOONDOOMA Dam Yellowbelly Fishing Competition spokesman Terry Allwood said the lake fished extremely well for the 2018 event, with 278 fish going through the catch and release section and another 252 in the gilled and gutted section.

The biggest yellowbelly of the event weighed in at 2.215kg. The competition set new records for the third year in a row with a massive attendance of 1123 entrants including 272 juniors. Cash and other prizes were presented at the end of each of the three sessions, with overall competition winners revealed at the conclusion of the event.

The water level in the lake was 44 percent, which together with the clear blue skies set the scene for a great weekend of camping, fishing and family activities. Profits from the event are used to supplement fishing permit funds from the Queensland Government and to date about 5.1 million fingerlings have been stocked into Lake Boondooma.

The catch and release category of longest native targeting Australian bass and yellowbelly was won by John Francis of Kingaroy with a bass measuring in at 535mm. John took home over $500 in cash, prizes and a trophy, proudly sponsored by Thug Lures and Shimano Fishing Australia.
Chloe Manthey put in a solid effort under some guidance from her dad Shaun Manthey to walk away with the most fish (bass and yellowbelly) caught and released throughout the competition with a total tally of 10 fish presented to the weighmaster.

The heaviest yellowbelly title was claimed by Scott Johnston of Proston with a yellowbelly of 2.215kg. Scott took home $410 cash plus prizes and a trophy, sponsored by Corey and Nikki Goldie of the Lake Boondooma kiosk. The winner of the heaviest bass section sponsored by Wondai Accounting and Tax Services was D. Rutch of Mooloolah with a bass of 1.37kg to secure a paycheque of $350 plus prizes and trophy.

Hanwood Fish Hatchery champion junior angler for yellowbelly was Lucy Stead of Kingaroy with a yellowbelly of 1.8kg, while the bass title was claimed by Benson Graham of Wallumbilla with a bass weighing 1.315kg. The 3.6m Quintrex boat, motor and trailer package was won by Ryan Daley of Clifton and proudly sponsored by South Burnett Regional Council.

The Dragon Kayak was won by Keith Smith of Highfields. Congratulations to all the winners and thank you to everyone who attended and made the event such a success. All profits from the weekend go back into buying more fingerlings. The future for the Lake Boondooma fishery is looking very healthy.

Next year’s annual competition will be held on February 9 and 10, 2019. Entry costs will remain at $20 for adults and $5 for juniors aged 16 and under.The ongoing support of our many generous sponsors ensured a wide range of prizes and lucky draws were available for all competitors this year, with over $40,000 worth of cash and prizes given away.

Food and drinks stalls were provided by local community groups over the weekend and the great camping facilities provided by the South Burnett Regional Council were put to good use by those staying at the lake. Additional information on the local area and past fishing competitions can be found on the Proston Online website prostononline.info