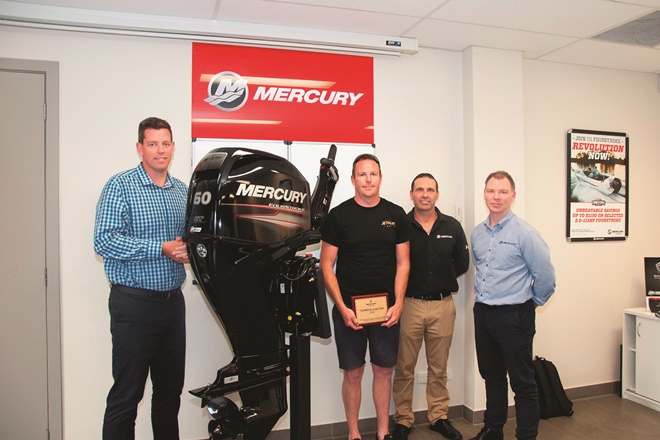 David Voorden is 2018 Mercury Technician of the Year 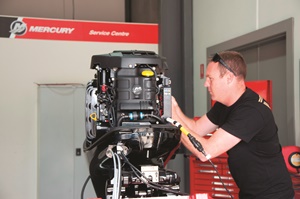 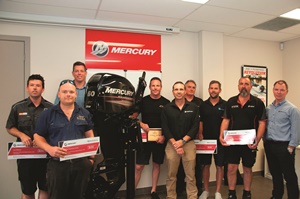 IN a nail-biting final, David Voorden has beaten the best from Australia and New Zealand to earn the title of Mercury Marine’s 2018 Technician of the Year.

David, from Leisure Coast Marine in Fairy Meadow, outside Wollongong, battled his way past technicians from across Australia and New Zealand to collect the first prize of a brand-new Mercury 60hp EFI FourStroke outboard.

In the final, held at Mercury Marine HQ in Melbourne’s Dandenong South, David and five other regional finalists had just 45 minutes each to diagnose and repair ‘faults’ in three different EFI engines – 40hp, 115hp and 135hp. Each technician had to verify the fault, isolate the failed system and component, repair/replace the faulty component and then test the repair. Competitors were awarded points for their process and speed.

When it was all over, only eight points separated the top three:

“When they announced the third and second place-getters, I thought ‘bugger, I’ve missed out’,”  David said. “Then they announced I’d won and it was a real surprise – a shock! The calibre of the technicians was outstanding. I was blown away to win just because of the experience and talent of the other guys in the room. I would like to thank everyone who’s helped with my training, and I’d like to thank Mercury for giving us this opportunity to show our skills and get recognised for what we do.”

The competition, in its second year, started with qualified technicians competing at a regional level in NSW, Victoria, Queensland, South Australia, Western Australia and New Zealand before moving through to the final.

The other regional winners were:

Additional high-achievement awards were given to:

Given the success of the first two years, the Technician of the Year competition is now firmly part of the annual Mercury Marine calendar. Mercury senior director of Engine Products, Aftersales & Marketing Australia, New Zealand and South Pacific Nicholas Webb said, “All credit to the technicians who put up their hands to put their skills to the test. Once again the competition has showcased the knowledge and technical skills of the top Mercury technicians and the knowledge and skills required to provide the very best of support and service to Mercury customers. David is a worthy winner of a super-competitive event, so congratulations to everyone who took part.

“You guys are a crucial part of what Mercury’s all about.”

Back at work already, the new champion hasn’t quite decided what to do with his new engine because while David loves spending time on the water, he doesn’t own a boat. “I go out a lot in my father-in-law’s boat and my brother-in-law has a boat as well, so maybe one of them will get a nice Christmas present!”