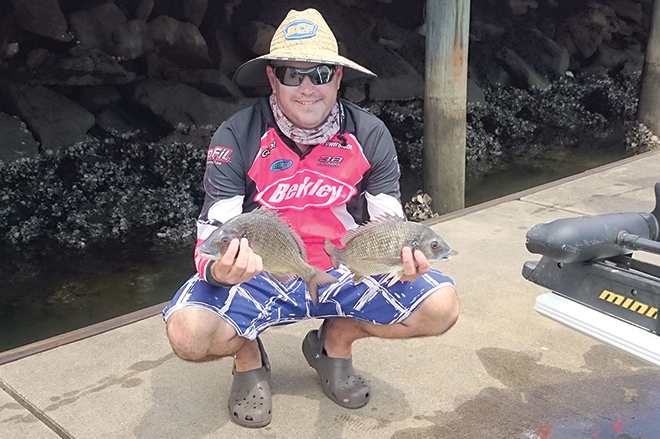 Plenty of quality bream were caught during the event.

THE 2015 tournament year peaked with the ABT Grand Final recently held at Yamba on the mighty Clarence River.

The venue is a favourite of ours, with plenty of good results over the years. It is a massive system with heaps of fish and the chance of nailing some really big bream. Loads of comps have been held on the Clarence this year and most have been won on the deep walls in the lower reaches as well as the breakwalls right at the end of the system.

With the event being held in summer, the question was whether the bottom end would hold up, as it traditionally produces a winter bite. The pre-fish saw us split up the river as we normally do, covering the mouth all the way up to Brushgrove, which is a huge area.
What became apparent was that no area was holding big schools of fish but most of the better fish were located from Harwood downstream, with Wish nailing a 39cm model at Collis Wall (wrong day though!).

After a quick discussion we decided the best option was to rotate between all the lower rock walls of the system and Browns Rocks. On the first day, Britto had a flying start, boating a 30cm model on the first cast and having a dream two hours following, filling his limit and upgrading three times. The approach was simple, with crab-profile lures fished all the way to the bottom down the face of the wall.

Whether the fish followed them down or were on the bottom was unclear, but the pattern worked.
Britto moved away from Collis Wall and fished Middle Wall for a period with no further upgrades, then moved to Browns Rocks and Palmers Island looking for upgrades.

He had one shot late in the session on a deep ledge at Browns with a Berkley Gulp Nemesis. The fish was pulled off the bottom but managed to get back to the ledge and rub off the 1kg straight-through fluorocarbon. It was obviously a large bream and would prove to be a costly loss, however with 3.21kg in the bag, it was a good start.

Wish found the first day a little harder and the area that yielded the big model the day before was a lot slower. Midway through the session, Wish was still looking to fill his bag. Fishing a similar pattern to Britto, Wish just needed the bites.

Making a big decision and running to Brushgrove and then back to Browns allowed him to fill his bag. With upgrades hard to come by, Wish weighed 2.48kg, which was still a good start. The big story on day one was the massive bags taken from the breakwalls, with Tom Slater breaking 4kg and Tristan Taylor not far behind.

On the second day we decided to run the same pattern. With the tides getting later and bigger each day, the risk was always whether everything would hold up or be delayed. Both boys started at Collis again, though the first cast hook-up didn’t repeat.
It quickly became apparent that the bite was likely to be an hour later with the tide, with only two fish in the first hour for Britto.

Wish made a bold decision and decided to go in behind the wall, fishing a surface pattern across the vast flats system that exists between the wall and the bank. This move proved a winner, with plenty of rises and fish in the live well including a good 30cm-plus model. Meanwhile, Britto was methodically working his way along the wall and slowly putting a bag together.
While numbers were down on the day before, quality had improved.
About two hours in, the non-boater hooked a big fish, which strangely enough didn’t do much until halfway in, and then played up. By then it was free of structure and we were ecstatic to see a 38cm fork-length fish slide into the net. The bite slowed after that, but with one fish under 30cm still in the bag, an upgrade was required. This came soon after a move to Middle Wall, with a 30cm model tipping out the smaller 29cm specimen.

With a monster bag by 10.30am, the rest of the day was spent looking for new ground. Wish kept going at Collis and then cycled through Browns Rocks and Palmers Island to fill out the bag and upgrade a few times to weigh 2.38kg. Britto’s bag went 3.82kg and had him leading the field by 600g going into the last day.

Overnight, the decision was made not to change anything, but the size and timing of the tide was a worry. This proved to be on the money, with a very slow start. Fishing with Shaun Egan on the last day, Britto was very nervous an hour into the session with only one small rat in the well and a non-functioning pump.

After putting in an oxygenator the boys buckled down, and while it took a lot longer, they put together a bag in three hours. The problem was that the quality had dropped and there wasn’t a fish above 30cm in the bag. Making the decision to chase upgrades, Britto went to Middle Wall, which hadn’t really produced much previously, but thankfully it provided two 30cm upgrades in 10 minutes.

After concentrating on the wall for two more drifts for nothing, it was either Browns or Collis again for the final one and a half hours. Collis just looked too good, and there were big eddies forming with the strong tides. About 20 minutes in, Britto and Shaun both hooked up on big fish, literally within 10 seconds of each other.

Shaun had his off the wall but somehow it got to the bottom and rubbed him off, and Britto had his off the bottom twice before it drilled him back to the snag. Those two missed fish really hurt at the time but Britto didn’t know how much until a little later. Wish spent day three fishing a carbon copy of day two and working a rotation around Collis, Browns and Palmers and filled out his limit for a full bag over three days in a grand final, which is always a great achievement.

Back at the weigh-in, it became apparent everyone had done it tough and Britto felt he probably had everyone covered in the top five after hearing what they had to say. However, no one saw Liam Carruthers coming from sixth with a massive 3.78kg on the last day to storm up the board.

As Britto weighed, he needed 2.5kg to sneak home and he knew it would be touch and go. The scales settled on 2.44kg and it was a loss by the narrowest of margins: 60g!

Congratulations to Liam on a sensational win.
We will be back again in 2016!